NASCAR Xfinity race had to cancel qualifying for the strangest reason 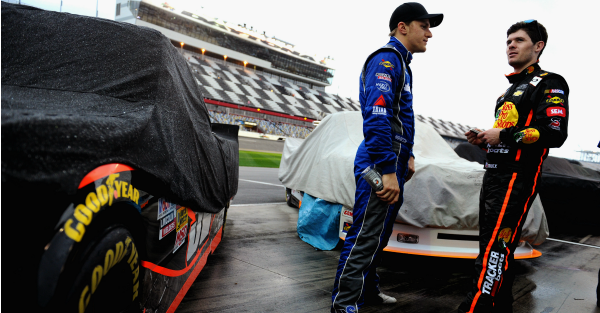 With the NASCAR cup and truck series on vacation, it was the Xfinity series’ time to shine. Being the only NASCAR affiliated racing over the weekend, the Johnsonville 180 NASCAR Xfinity Series race at Road America in Wisconsin got top billing on NBC.

Heading into the race, forecasts predicted a soggy afternoon, but team’s weren’t about to let a little rain ruin their day in the sun. Barring lightning, the cars were prepared to don racing tires and windshield wipers and do what NASCAR drivers rarely get to do, go racing in the wet.

Leading up to the race, however, the weather improved. So much so, they had to cancel qualifying.

That’s not a typo.

NBCSports reports that qualifying was scheduled to take place on rain tires on Sunday morning but the rain just never came. After waiting nearly an hour for the rain that would never come, NASCAR finally cancelled qualifying.

The starting grid was instead determined by owner’s points, giving Austin Cindric the pole.

No driver was more excited about the possibility of a wet race than Parker Kligerman.

?I believe as the rain percentage chance increases, our chance of winning increases,? Kligerman said per NBCSports. ?I?m hoping it?s a wet race just because I love racing in the rain.

?The thing about racing in the rain is it?s the great equalizer. Motor doesn?t matter, horsepower doesn?t really matter, it comes down to mechanical grip and for the driver to find that grip.?

Now, starting from the back row, Kligerman will have to attack the field on a more mundane, dry surface.