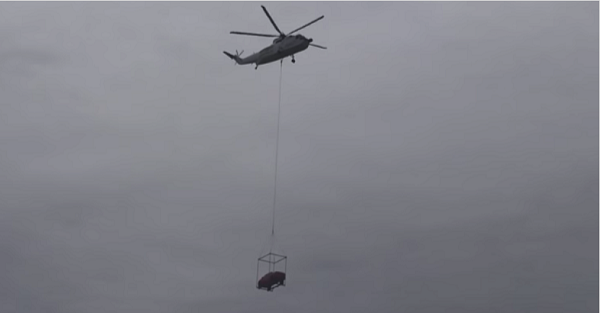 Have you ever seen a pickup truck dangling from beneath a helicopter?

That was the site Chevrolet truck enthusiasts witnessed at Texas Motor Speedway recently when they gathered to celebrate 100 years of Chevy pickups. At the speedway, attendees got to drive a 2017 ZR2 pickup truck over an obstacle course and also ride shotgun in a new Corvette or Camaro during a hot lap around the oval.

There were even celebrities on hand such as Cup Series drivers Kasey Kahne and Jamie McMurray, but the biggest star to attend the event was Dale Earnhardt Jr. Recently retired from NASCAR, Dale Jr. brought his 1948 Chevy and 1989 S-10 regular cab to the event. His trucks were on display along with over 100 other vintage trucks produced by the bowtie brand.

According to AutoBlog, Dale Jr. talked about his looming broadcast career and how nervous he felt, as well as his future racing plans. Afterwards, Chevy gave Dale Jr. the hood of a ZL1 pace car to thank him for everything he’s done for NASCAR and Chevrolet.

However, Dale Jr.’s speech wasn’t the most noteworthy event at the track that day. After Junior was done talking, a Sikorsky helicopter appeared carrying a 2019 Chevrolet Silverado beneath it. The all-new Silverado was then lowered to the ground and shown to truck enthusiasts attending the event.

This marked the first time anyone from the general public saw the redesigned Silverado pickup. The truck is set to make its official debut at the Detroit Auto Show in January.

“Think of this as an all-new truck 100 years in the making,” said GM’s president of North America Alan Batey, according to Automotive News. “The next-generation Silverado is poised to change, really change, the face of trucks again.”