Chevy and Ford are falling behind entering the NASCAR playoffs 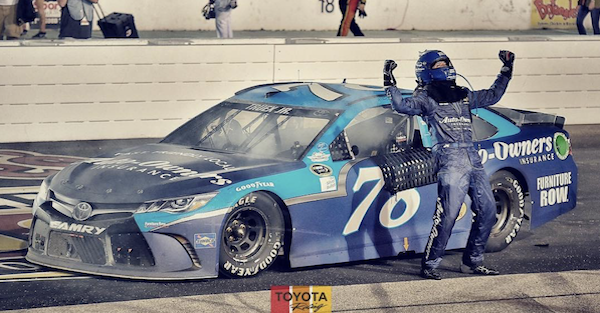 Toyota has made great strides in the final stretch of this season, especially with their leaders Martin Truex Jr. and Kyle Busch. Combined with the other Toyota drivers, they have led 875 laps of the last 5 races. Compare that with Ford and Chevy at only 117 and we see how complete Toyota’s dominance has been lately.

Truex has 34 playoff points as of his victory on Sunday and will most likely finish the season out as the regular season champ. If that ends up being the case, he will receive an additional 15 points that will carry him through the first three rounds.

He had this to say to NBC Sports:

“I feel like with the way we run, coupled with the bonus points, we should essentially be a lock for Homestead, I really feel that way. But at the same time, this is racing, and anything can happen.’’

Anything can happen is right, especially in NASCAR. Toyota is kicking serious butt right now, but if they’re going to have real playoff success, they mustn’t forget how quickly things can turn around. It wasn’t too long ago that Chevy and Ford combined to win 9 of the first 10 races of the season. Toyota definitely needs to keep this momentum going as you know the other teams are very motivated right now to finish strong.