This NASCAR in-race segment was insulting 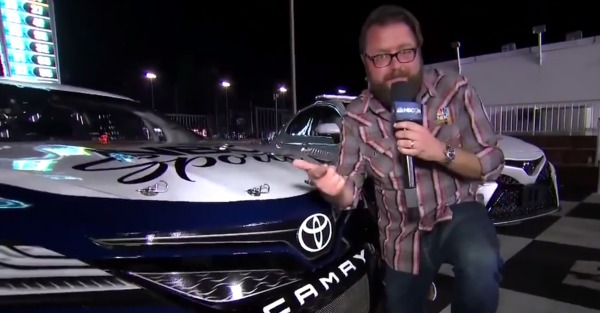 NASCAR fans aren’t dumb. They know that these “stock cars” are as similar to their production counterparts as a blockbuster film to a work boot. Sure, in the olden days teams used to run barely modified production muscle cars, but modern NASCAR is a bunch of stickers pasted on a tube frame. Fans know this, which is why this blatant Toyota commercial disguised as race analysis was so insulting.

Ever notice this Toyota Camry race car looks a lot like the one on the streets?

Cooling!? 75% of that grill is stickers! The actual mesh cutout that allows for airflow is no different from the other brand’s cars. No one truly believes that a front wheel drive economy car with an optional V6 is the same as the rear wheel drive V8 race car.

The worst part? Toyota doesn’t have to do this. The Camry is always at or near the top of best selling sedans. Yes, Toyota is pushing hard lately to change their “boring” image, but the impressive 301hp the Camry V6 puts out should be able to speak for itself as much as a mid size sedan can.

Did that 301 hp figure surprise you? Us too. That’s because Toyota is wasting its time forcing NBC to sneak in product placement like this into the race broadcast instead of just showing off the incredible feat of making a Camry actually interesting.