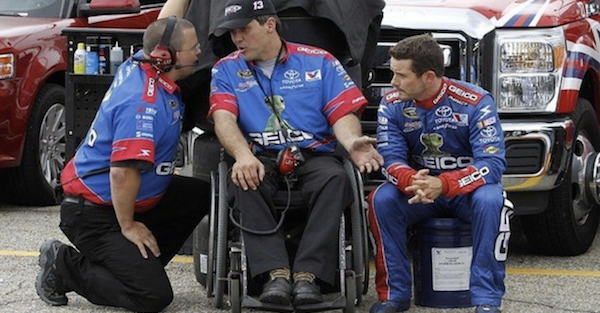 Germain Racing just announced that NASCAR Cup Crew chief Robert ?Bootie? Barker will be leaving the team after this season.

Germain Racing made the announcement in a short, terse statement on its website.

Today, Monster Energy NASCAR Cup Series team Germain Racing announces that their 2018 No. 13 Chevrolet Camaro ZL1 program will be led by a new crew chief to be announced at a later date.

Crew chief Robert “Bootie” Barker will remain in his role for the No. 13 GEICO / GEICO Military Chevrolet, driven by Ty Dillon, for the duration of the 2017 season but will not be with Germain Racing in 2018.

The veteran crew chief has been with Germain since 2010, and has mainly worked with the No. 13 car currently driven by Ty Dillon. This season has been a struggle for Dillon, whose best finish was at Talladega four weeks ago, where he finished 11th. Most of Barker?s success as crew chief has come from his 94 Xfinity Series races where he has four wins, 20 top fives and 39 top 10s. He was also briefly involved with the Truck Series as crew chief for three races.

Barker, who was paralyzed from the waist down in a high school car accident, has more than 15 years of experience as a NASCAR crew chief. The team has not announced who will replace him for next season.