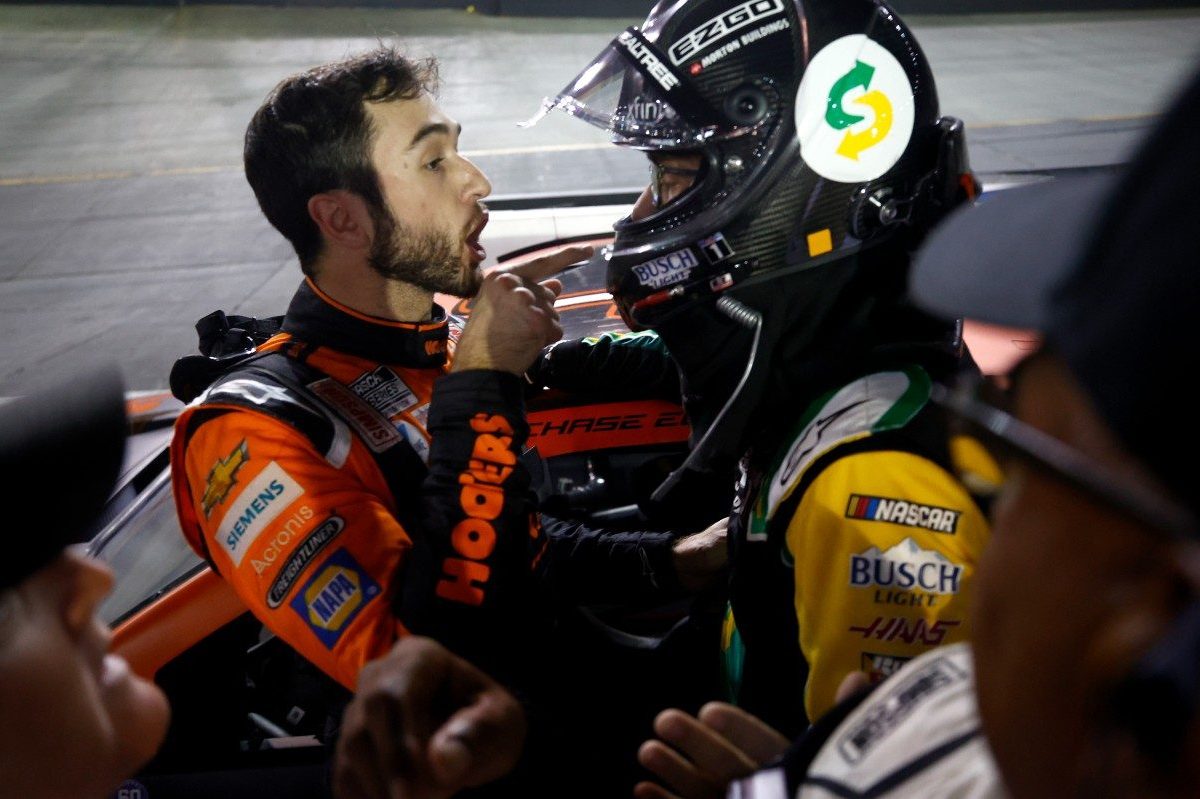 You arguably can’t have anything resembling (memorable) drama in NASCAR without a good feud.

In 2021, there were plenty, giving NBC and Fox Sports material to feed highlight reels for years to come. What originated as in-race incidents devolved into pit road fisticuffs, cross words, and custom shirts.

Here’s a look at the five best NASCAR rivalries of the 2021 season.

It started on pit road, when a chaotic sequence of events ended with Gragson backing his car right into the front of Hemric’s and nearly hitting a Hemric crew member.

Oh, and Gragson may or may not have flipped off Hemric while doing it.

Afterward, as Gragson was interviewed by the Performance Racing Network, Hemric made a beeline for him and lunged.

“If you ever f****** do that…” Hemric was briefly caught saying before the audio cut off.

As they grappled, Gragson threw a right cross. Hemric dodged and threw his own punch that missed. Gragson threw more as crews separated them.

“I’d be mad if I was in his shoes too, based off what he’s done is his career,” Gragson told Fox, a clear dig at Hemric’s then winless record in NASCAR.

Hemric got the last laugh. Seven months later, he claimed his first NASCAR victory and the Xfinity title.

Kevin Harvick hadn’t won a NASCAR race in a year.

So things were likely already tense for Harvick going into September’s night race at Bristol Motor Speedway. That boiled over when Harvick got into it with Chase Elliott in the final laps as they raced for position. After Elliott initiated a three-wide pass, Harvick and Elliott made contact, resulting in a cut left-side tire on Elliott’s No. 9 Chevrolet.

Forced to pit, Elliott returned on fresh tires, chased Harvick down, and passed him, rubbing doors in the process. Elliott then proceeded to impede Harvick as his Hendrick Motorsports teammate Kyle Larson raced him for the lead and the eventual win.

On pit road afterward, Harvick confronted Elliott (with his helmet on), and the two exchanged heated words. Later, NBC cameras caught Harvick slamming his helmet in anger on the top of his car.

“Goddamn, I’m ready to rip somebody’s freaking head off,” Harvick declared to NBC. “I just told him it was kind of a chickens*** move that he did there at the end. We’re racing for the freakin’ win at Bristol and we’re three wide in the middle and he throws a temper tantrum.”

Harvick would get revenge, sort of.

Weeks later at the Charlotte Roval, Harvick used his front bumper to send Elliott sliding into a wall. After his car was repaired, Elliott eventually found Harvick. With 11 laps to go and Elliott applying pressure, Harvick locked up his tires and plowed into the Turn 1 tire barrier.

Harvick was eliminated from the playoffs. Elliott provided arguably the line of the year, wishing Harvick a “Merry offseason and a happy Christmas.”

Don’t make Denny Hamlin angry. You wouldn’t like him when he’s angry.

Unfortunately for Alex Bowman, he did exactly that.

With seven laps left in the Martinsville playoff race, Bowman spun Hamlin from the lead in Turn 3. Bowman went on to win.

But, before he could celebrate, Hamlin literally got in the way, using his car to impede Bowman’s victory burnout and then flashing him double birds through his windshield.

“He’s just a hack. Just an absolute hack,” Hamlin said. “He gets his ass kicked by his teammates every week. He’s f****** terrible. He’s just terrible. He sees one opportunity, he takes it.”

Bowman was apologetic afterwards. But, he also took advantage of a good marketing opportunity. He had barely left the track when his website began selling “Hack” shirts.

This feud likely wasn’t on anyone’s bingo card for 2021.

Kyle Larson and Christopher Bell had a respectful, if not friendly, rivalry for years thanks to their time competing on dirt. That changed, at least for a week, after the NASCAR Cup Series race at Watkins Glen. While racing with Martin Truex Jr., Larson and Bell made contact in Turn 1 and Bell spun.

A couple days later on SiriusXM NASCAR radio, Larson claimed Bell was “not willing” to talk to him about it.

Bell took issue with that.

“I didn’t really think that the incident needed to be discussed,” an uncharacteristically incensed Bell said at Indianapolis.

Bell said Larson never called him, but sent a text message at midnight he didn’t see it until the next day. Bell called Larson’s text “unnecessary,” but that Larson “running his mouth is a little uncalled for.” That feud didn’t last long, but at least we got to see Bell’s spicy side.

This was a rivalry that defined NASCAR in the 2010s, but hadn’t had many recent flare ups.

While Denny Hamlin and Alex Bowman dominated the post-race discourse at Martinsville, Brad Keselowski and Kyle Busch produced their own mini-soap opera.

As Bowman raced to the win, Keselowski and Busch jockeyed for second. After briefly making contact coming to the checkered flag, Busch was second and Keselowski placed third. As they dove into Turn 1, their cars came together again, causing Busch to spin his No. 18 Toyota.

It was a one-sided war of words afterwards.

“What was he going to do? Spin me out?” Busch said. “He was trying to do a Harvick is what he was trying to do. For what? For second place? He wasn’t going to transfer through with that. Freaking r*******, man. I should beat the s*** out of him is what I should do. But that doesn’t do me any good.”

Busch would wind up being penalized with sensitivity training for directing a mental handicap slur at Keselowski.