Only three spots remain for the 2017 Cup Series playoff field 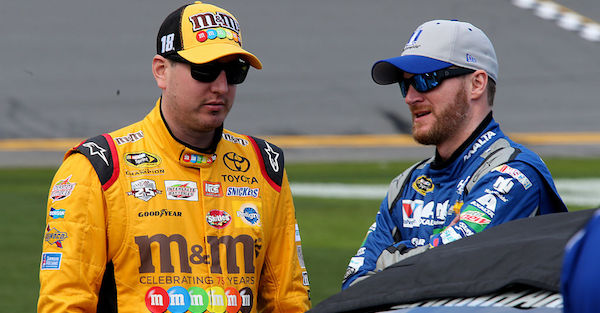 With only five races left in the regular season, the playoff field is starting to take shape for the 2017 Monster Energy NASCAR Cup Series.

Kyle Busch was almost certainly going to make the field anyway, but Sunday’s win at Pocono Raceway clinched his spot in the playoff field.

If the playoffs started today, the other three drivers who would make the field are Chase Elliott, Jamie McMurray and Matt Kenseth.

Clint Bowyer is just on the outside looking in, and he’s followed by Joey Logano, Erik Jones and Daniel Suarez. Bowyer could sneak in without winning a race, but the other three will likely have to steal a victory down the stretch to make it into the postseason.

McMurray is one point behind Elliott, and both drivers can feel safe for now, though that can change quickly. McMurray has a 21-point lead on Kenseth.

Of course, any of that can change in just one week. If a driver outside of that group wins on Sunday or in the five remaining races, it steals a bid. Austin Dillon is the lowest-ranked driver in the field at No. 21.

Dale Earnhardt Jr. is running out of time and chances to make the playoffs, though he did have a better showing Sunday than he has in previous races.

Five races is still plenty of time, and all it takes is one great race to clinch a playoff berth.