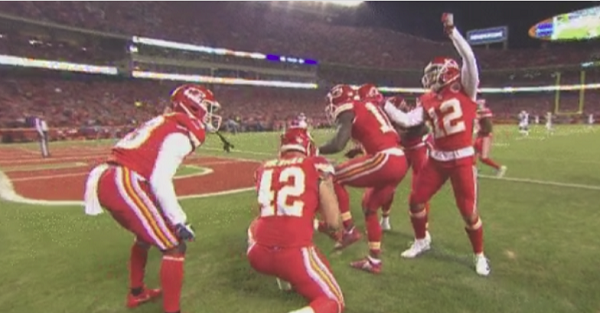 The end zone of a football field is an odd place for a pit stop.

After scoring a touchdown in Saturday’s NFL game between the Kansas City Chiefs and San Diego Chargers, Chief’s player Tyreek Hill celebrated with teammates by performing a make-believe pit stop. While Hill acted as the race car, running back Anthony Sherman pretended to jack up the car and receiver Albert Wilson was the imaginary gas man.

Just as NASCAR teams evaluate the performance of their crews to find ways to improve, the Kansas City Chiefs asked the opinion of Kansas-native and veteran Cup Series driver Clint Bowyer.

The 38-year-old Bowyer responded by describing the touchdown celebration as “badass.” The Chiefs went on to win the game 30-13.

Hey @ClintBowyer, how would you rate this pit stop? 🏁🏎 #ChiefsKingdom pic.twitter.com/nYSUUfQ2cX

If this isn’t badass I don’t know what is. Helluva stop boys!!! 😂 https://t.co/ELl5JSmFUh

After finishing second in the NASCAR point standings behind Brad Keselowski in 2012, Bowyer hasn’t won a single race in the past five seasons. Bowyer joined Stewart-Haas Racing prior to the 2017 season and earned 13 top-10 finishes during his inaugural campaign with SHR.

Bowyer hopes to end his winless streak in 2018 so he can perform his own “touchdown celebration” in victory lane.

Related: Coach Gibbs knows how the NFL and NASCAR are the same, and the big difference