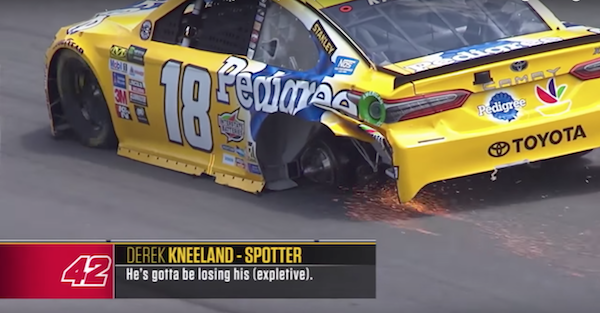 NASCAR handed out four-race suspensions for Busch’s crew chief, tire changer, and tire carrier after a tire rolled off of the driver’s car during the race.

Related: Yet another NASCAR driver lashes out about the recent Kyle Busch drama

Busch made a pit stop during the race, but the crew didn’t attach the left wheel tire properly.

In the video above, Clint Bowyer can be heard saying, “that’s a four-week suspension.” Spotter Derek Keeland said, “Oh my god, someone’s gotta go over and listen to (Busch’s) freakin’ radio. He’s gotta be losing his (expletive).”

When they tuned in to Busch’s radio, there was nothing but silence.

The entire video is humorous to listen to as Jimmie Johnson picked up his third win of the season at Dover.