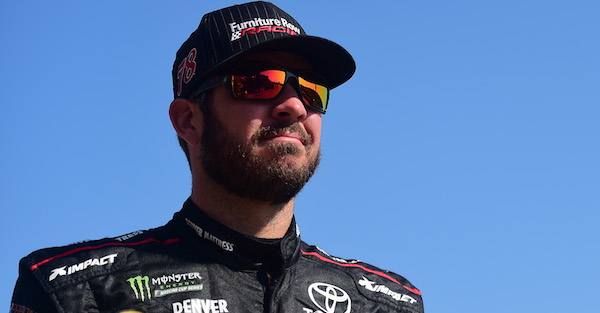 Earlier this year, @MartinTruex_Jr​ took fans with spinal cord injuries out for the ride of their lives around the @MonsterMile. pic.twitter.com/XM0g1VqxhY

You need something to feel good about? I challenge you to walk away from this story not feeling inspired and with a greater amount of respect for Furniture Row Racing and Martin Truex, Jr.

The team was approached by a Colorado neurosurgeon hoping to develop an adaptive racing experience for people with spinal cord injuries. Up steps Furniture Row Racing to build a stock car outfitted with two seats and hand controls.

“The inspiration came from a former patient of mine who became spinal cord injured,” said neurosurgeon Dr. Scott Falci. “He was an avid race car driver and he told me that he was dying to get back into a race car. And that’s really where it started. There was no adaptive motorsports for the spinal cord injured, so we thought let’s go develop it.”

Not only did the patients get a shot at running a true race car around Dover International Speedway, they first got a personal high-speed tour of the track with NASCAR champ Martin Truex, Jr. behind the wheel. Video of the encounter was tweeted out by NBC.

Earlier this year, @MartinTruex_Jr​ took fans with spinal cord injuries out for the ride of their lives around the @MonsterMile. pic.twitter.com/XM0g1VqxhY

“I think of all the places I’ve done ride-alongs, this is definitely the craziest one,” said Martin Truex, Jr. “This track, they call it the monster for a reason. Just insane what it feels like. I think they got a whole new appreciation for NASCAR and what we do behind the wheel.”

Judging by the smiles and how quickly folks lined up to take the driver’s seat, this new program is off to a fantastic start. Don’t be surprised to see more teams participate in the future.