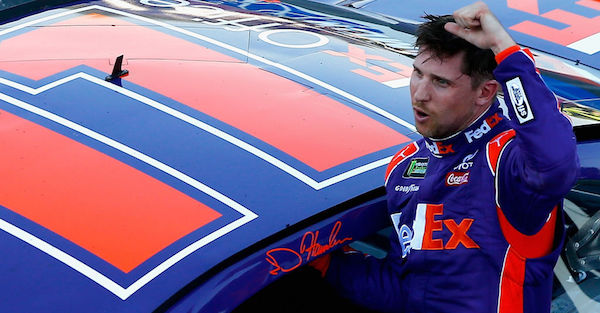 Denny Hamlin won his first race of the season on Sunday at the Overton’s 301 at New Hampshire Motor Speedway, and he clinched a spot in the postseason.

Hamlin recently appeared on NBC’s “NASCAR America,” and he discussed how his competitive nature doesn’t just apply to being a NASCAR driver.

Related: Veteran driver wins his first race of the year at New Hampshire

Hamlin plays basketball and golf in his spare time, and he was asked what he needed from playing those other sports.

“The competition,” Hamlin said. “We only get to compete one day a week in racing. We do it on Sundays. To me, it’s a way to keep that competition going throughout the entire week.”

Hamlin said he loves to stay active, but he doesn’t particularly enjoy going running. So playing basketball helps keep him in shape while also stoking his competitive fire.

Hamlin is also the commissioner of a golf league, though he said being commissioner doesn’t exactly result in winning. He was even on the Golf Channel earlier this year.

The one issue about playing basketball frequently during the week is the risk of injury. Hamlin didn’t seem too worried about the possibility of injury outside of racing.

“I would get injured doing something else,” Hamlin said. “I’m going to stay active and do stuff. I just can’t sit on the couch every Monday through Thursday or Friday and do nothing. There’s risk in everything we do. … It’s just what we do to stay competitive.”

Hamlin has had an impressive season thus far, especially after Sunday’s win at New Hampshire. He is now fifth in the points, and he has an opportunity to win his first Cup championship this season.