Countdown to the Daytona 500: Remembering the Allison’s 1-2 finish 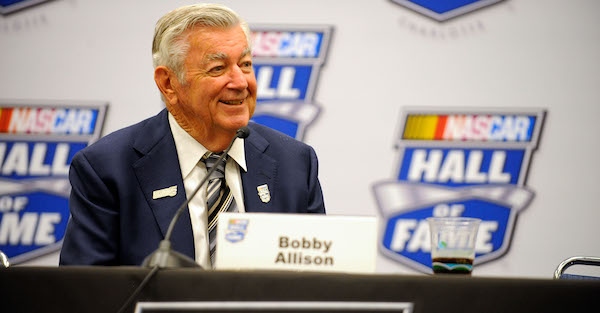 Jared C. Tilton/Getty Images
during the 2011 NASCAR Hall of Fame induction ceremonies at the Charlotte Convention Center on May 23, 2011 in Charlotte, North Carolina.

The Daytona 500 is 10 days away, and we’re counting down the days until the NASCAR season begins at Daytona International Speedway with memorable moments at the most prestigious race in the sport.

The 1988 Daytona 500 was the first mandated restrictor plate race due to the incredibly high speeds at the track, but that wasn’t the most memorable thing to happen at the race.

Richard Petty suffered a devastating crash on Lap 106, and he rolled over eight times and was hit again. With Petty eliminated from the race, the Allisons — 50-year-old Bobby and his son, Davey — eventually made their way to the front of the pack.

Bobby and Davey battled for position, but Bobby eventually separated himself from his son and won the race. The father-son duo finished 1-2, and they celebrated with each other in Victory Lane.

Related: Countdown to the Daytona 500: Remembering the 1979 fight between Cale Yarborough and the Allisons

Bobby Allison became the oldest driver to ever win the Daytona 500 at age 50. It was the last win of his career.

Davey Allison eventually made his way to Victory Lane at the Daytona 500 in 1992.

But the 1988 Daytona 500 will always be remembered as a historic day for the Allison family, and it’s incredible to see the two celebrate with each other following the 1-2 finish.