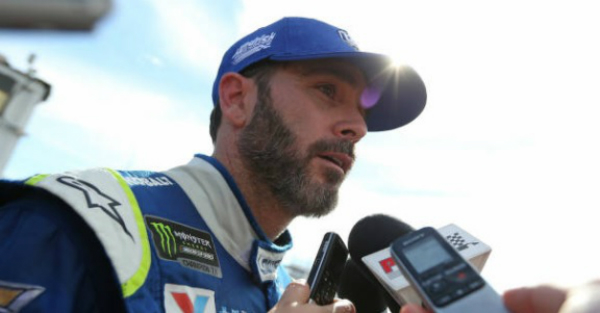 Jimmie Johnson can probably think of many things to do with his time. Sitting in front of a camera for two hours probably isn’t even at the bottom of the list. It’s way off on some other list right below having a root canal.

Johnson, the NASCAR veteran that he is, knows it comes with the territory. Sitting for two hours to do a SMT (satellite media tour) is an exercise in patience and control. You see, you’re sitting in one place in front of a camera and answering the same questions over and over and over posed by reporters at TV stations all over the country. The idea is to have a big star promote an upcoming race. In this case, Johnson was plugging the second race of the season at the Atlanta Motor Speedway.

If anyone knew how miserable a 2 hour SMT was they’d buy a ticket. Good work @JimmieJohnson https://t.co/Mb46cH82cT

Johnson got some love from two of the biggest names in NASCAR who have been in that same seat many times. Dale Earnhardt, Jr. has endured more than his share of these tours. You’re talking to a different reporter at a different TV station about every 10 minutes, but inevitably you get the same questions. The trick is each time you answer that same question, you have to make it seem like it’s the first time it was asked. It helps to be a good actor.

Omg. The worst. I try and enforce a 90min or less rule, I don’t always win. https://t.co/K1vJmuYIxd

Danica Patrick is probably still doing a ton of these promoting her new book. And if it’s one thing NASCAR drivers know, it’s how to promote. Earnhardt, Jr. says these types of satellite interviews can be challenging but are essential for promotion. Being able to connect with fans via local television stations is vital to NASCAR. And let’s not forget all the radio interviews and podcasts and social media videos that go with it. If you add it all up, drivers spend more time promoting their sport than they do racing.