After the first win of his career, Chase Briscoe takes home a major award 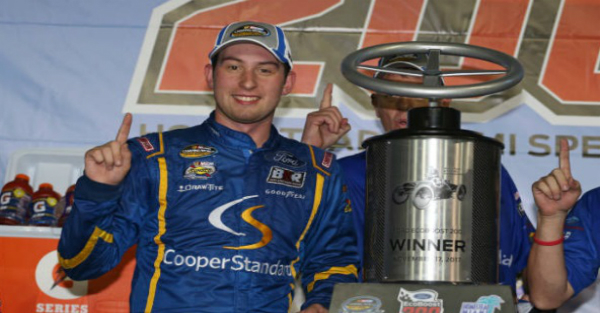 In only his first season in the NASCAR Camping World Truck Series, Chase Briscoe has already left his mark on the sport.

The 22-year-old driver closed out the season with his first victory at Homestead and was also named Sunoco Rookie of the Year. But more impressively, he was honored as the 2017 National Motorsports Press Association?s Most Popular Driver in the NASCAR Camping World Truck Series, according to NASCAR.com.

RELATED: Brad Keselowski racing has a bittersweet ending as it goes out on top

With 13 top-10 finishes, four poles, and his win in the season finale, it’s easy to see why he’s made such an impact in hos first season.

Briscoe appeared in an ad campaign alongside his Brad Keselowski teammate Austin Cindric, in an effort to gather some support and hopefully score some votes. It’s uncertain if the campaign was a success, but Briscoe definitely is, and if he keeps it up he’s sure to have a bright future ahead of him.

Briscoe is the third BKR driver in the past four years to take home the award, joining Tyler Reddick (2016) and Ryan Blaney (2014).

Voting for the award was open on NASCAR.com.