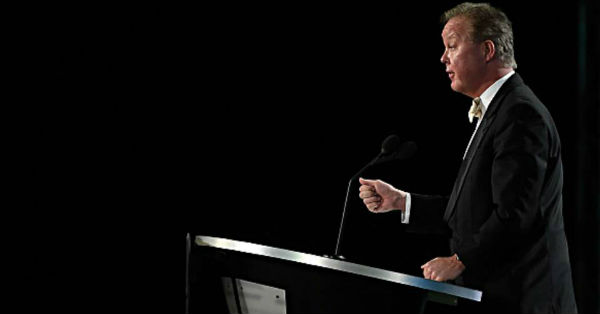 To quote a line from one of the all-time great Christmas movies, “Clark, it’s the gift that keeps on giving”.

NASCAR analyst Jeff Gluck and his twitter followers are having a field day with NASCAR CEO Brian France’s odd behavior during the NASCAR year-end awards banquet…and rightfully so.

Gluck tweeted out a GIF of France’s presentation of the championship ring to Martin Truex, Jr., showing the absurd way NASCAR’s top boss treated the man of the hour.

So naturally, his followers have come up with some of their own theories as to France’s behavior. Please note, they are not very kind.

That one was pretty tame compared to the following:

After the Brian France GIF yesterday, many of you tweeted back theories on his hasty exit. The funniest theory: pic.twitter.com/qLwnescEei

And then there’s this one that has nothing to do with Friday night, but as a one off, it’s pretty funny.

BZF at every press conference pic.twitter.com/CdeQ7WgVAX

One observant follower threw out this picture that looks pretty tame at first until you notice what was circled.

And while this wasn’t part of the Jeff Gluck string, it’s certainly hysterical.