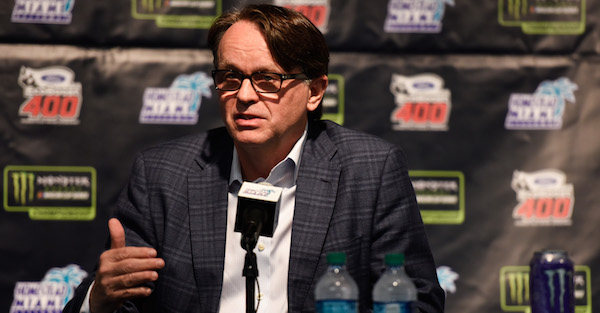 New NASCAR president Brent Dewar has been active on social media since taking over the sport in July of 2017, and he’s already managed to ruffle the feather of one track president.

Texas Motor Speedway president Eddie Gossage has been vocal in his opposition against condensed weekend schedules for Cup Series races, and he tweeted about it in October. Well, Dewar fired back on Twitter, and he basically called out Gossage for his tweet.

@eddiegossage you know better. There is NOT less, just different days. You might want to focus on your event next weekend

It should come as no surprise that Gossage wasn’t a huge fan of Dewar calling him out publicly on Twitter.

Gossage told Sports Business Journal’s Adam Stern that he was “surprised and disappointed” when Dewar called him out.

Dewar told Stern that NASCAR fans can probably expect him to continue to be vocal on social media about the sport in the future.

.@NASCAR prez @brentdewar on finding his voice on social media –

“What you saw was a clear path when I became president to start to insert my voice,” Dewar said. “I had focused on the amplification of the sport and I still am, but just trying to find that voice and I try to insert some comments strategically at certain points ? largely to make sure that there is not a misunderstanding or (to give) clarity around a direction.”

Bascially, Dewar’s message is that Gossage and others associated with NASCAR can expect more from the new president on social media. He isn’t backing down or shying away from making his point, which isn’t typical from an executive of a sport.