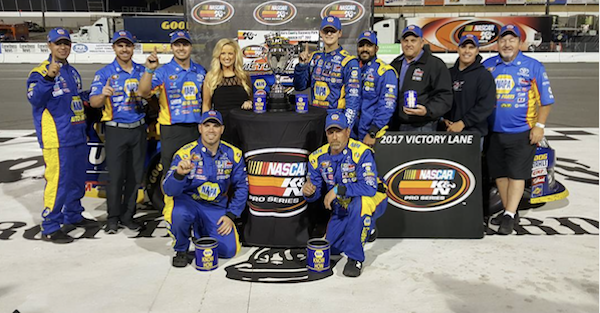 This past Saturday night proved to be huge for Bill McAnally Racing with Todd Gilliland winning his second straight K&N Pro Series West title, and teammate Derek Kraus winning his first K&N West race.  Coming into Kern County Raceway Park, Gilliland needed to come in seventh or better to take home the championship. He had this to say according to autoweek:

“I was pretty confident. With the speed we had and the position we were able to ride in, I thought we were going to have a really good shot at the win. Always a little disappointed in that, but I’m very proud of our effort all season long. To be able to come home the 2017 champion two years in a row is really surreal, and we just have to take it all in.”

This is the 8th title for Bill McAnally Racing, and its 3rd consecutive with Eggleston in 2015, and Gilliland in 2016 and 2017. Teammate Kraus, prevented Gilliland from winning his 3rd consecutive race at Kern after taking the lead at lap 106, and never letting it go.

For Kraus, this win was redemption for letting his lead at Idaho’s Meridian Speedway slip away in final overtime. The newly crowned Sonoco Rookie of the year had this to say, according to Autoweek:

“That Meridian race was actually going through my mind those last 30 laps,” Kraus said in victory lane next to his No. 19 Carlyle Tools Toyota. “But it’s been a really good night with getting Rookie of the Year and getting a race win, my first race win. That’s really great for me and my career, and will help boost me into next season.”