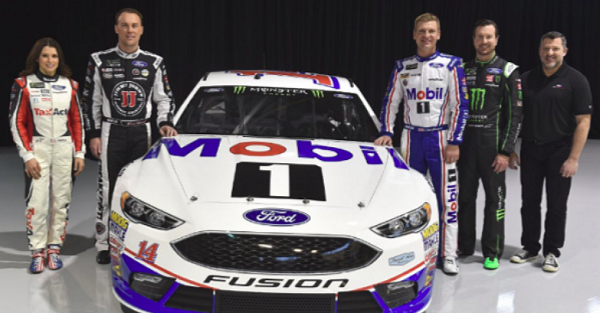 Kurt Busch will defend his Daytona 500 crown in a Stewart-Haas race car after all.

After months of speculation, Busch announced earlier this week that he signed a one-year contract to remain behind the wheel of the No. 41 Ford Fusion. Sponsorship will continue to be provided by Haas Automation and Monster Energy.

Monster Energy will only serve as co-primary sponsor for 24 races in 2018 and will act as the full primary sponsor for one Cup Series event. Haas Automation, which is SHR co-owner’s Gene Haas’ company, will sponsor the car for the remaining races, according to a Tweet from Sports Science Journal’s Adam Stern.

Busch had another solid campaign in 2017. He won the season-opening Daytona 500, finished in the top-10 15 times, and advanced to NASCAR’s playoffs. Despite this success, he was left in limbo after SHR declined to pick up his 2018 option in August. Both the driver and team wished to continue their partnership, but were forced to wait on Monster Energy’s decision whether it would offer sponsor next season.

Since joining SHR in 2014, Busch has earned five wins and made the playoffs each season. In 2018, Busch will be paired with crew chief Billy Scott. A year ago, Tony Gibson served in that role for the No. 41 team. However, he expressed a desire to get off the road, so Scott moved over to Busch’s team after working as Danica Patrick’s crew chief the last two years.

As you might expect, Busch is excited to defend his Daytona 500 crown in a SHR Ford.

“Knowing that SHR is committed to optimum performance, I believe that I have everything I need to win races this season and take home the 2018 Monster Energy NASCAR Cup,” Busch said, according to ESPN. “I look forward to taking on next year with my team, sponsors and determination.”