Michigan International Speedway: A Look at the History and Records of the Fastest Track in NASCAR 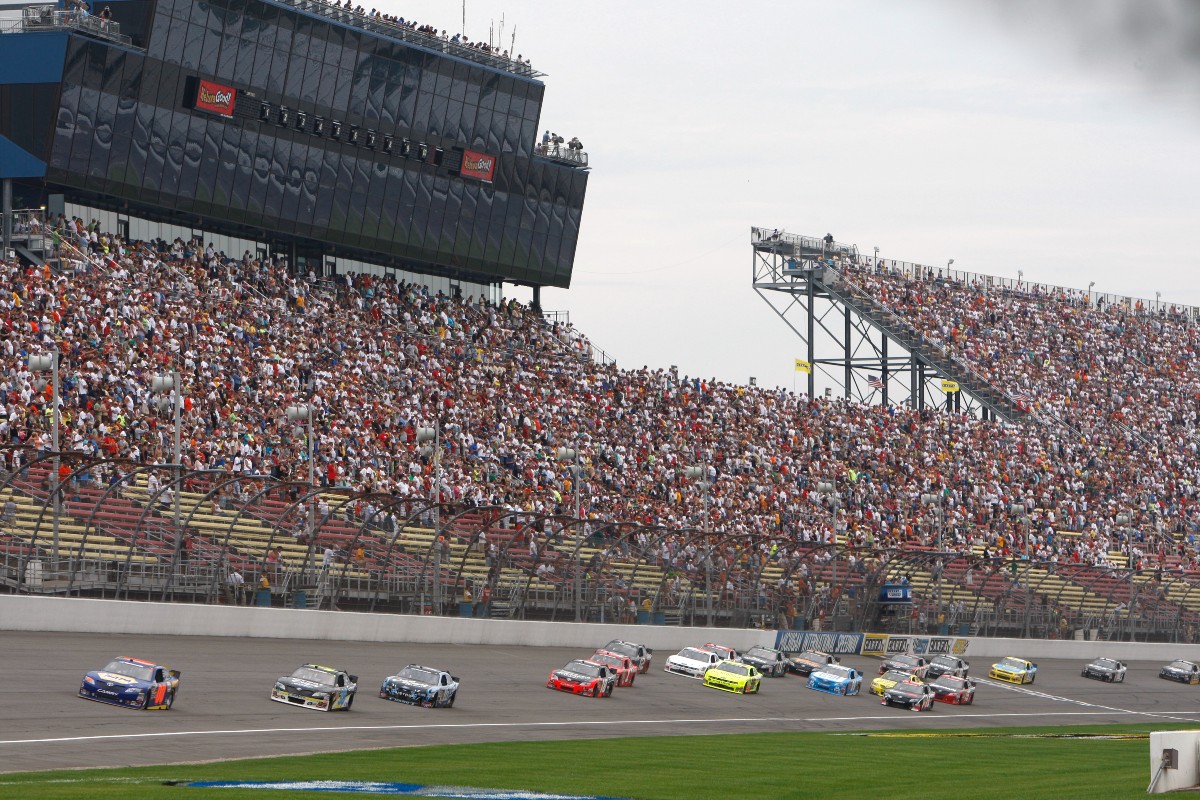 When stock car racing teams and drivers head out for a race weekend at Michigan International Speedway, you know things are going to get interesting. The track is located off U.S. Highway 12 near Brooklyn in the Irish Hills of Southeastern Michigan, around 70 miles west of Detroit and 40 miles from Ann Arbor.

The two-mile racetrack with banked D-shaped turns offers a unique driving experience for racers and fans alike. Michigan is also the fastest track on the NASCAR schedule, and with wide pavement, sweeping turns, and long straightaways, it’s not uncommon to see drivers enter the corners at over 215 MPH during qualifying.

It never hurts to learn a thing or two about the raceways that your favorite drivers compete at, so that’s why we’re going to be checking out some of the history and records at this iconic track.

Initial construction of the speedway occurred way back in September 1967. It opened for the first time in 1968 with a capacity of 25,000 people, and the overall cost was estimated to be somewhere in the realm of $4-6 million. The very first race to happen on the new track was the USAC 250 mile Championship where Ronnie Bucknum went on to grab the victory.

Roger Penske purchased and became the new owner of the track in 1972. During his ownership, capacity was upgraded from a measly 25,000 to 125,000 people. At this time, it was referred to as Michigan Speedway, and while Penske had a good long ownership, he eventually sold it to International Speedway Corporation (ISC) in 1999, and they still currently own it today.

A year later, the track was renamed to Michigan International Speedway. ISC made a number of other changes, as well. Over 10,000 seats were added thanks to the grandstands in turn 3, and they reconstructed 26 acres of land behind the grandstands into the AAA Motorsports Fan Plaza. Additionally, they added a three-story viewing tower, 16 new corporate suites, and a new press box. The track had been repaved on numerous occasions, but most recently in 2012.

Since we’re discussing history, let’s talk about a few gnarly incidents that have occurred at MIS over the years. In July 1998 during a CART race, there were three spectators who were killed and six more who got injured from flying debris following a crash during the race. In 2003, Todd Bodine and Kurt Busch, collided sending Bodine’s car into Kenny Wallace’s car, which burst into flames. Luckily, all drivers escaped without injury. Of course, we can’t forget the moment in 2007 when Dario Franchitti’s car went airborne during the IRL Michigan/Firestone Indy 400. It was astounding to see him leave the car without significant injuries.

While other motorsports leagues have hosted racing events at MIS over the years, it’s most commonly used for NASCAR races. Here, you’ll catch the annual Cup Series race, the Firekeepers Casino 400, as well as the Xfinity Series and Camping World Truck Series race. If you want to check out their schedule, or learn even more about the track, check out www.mispeedway.com.