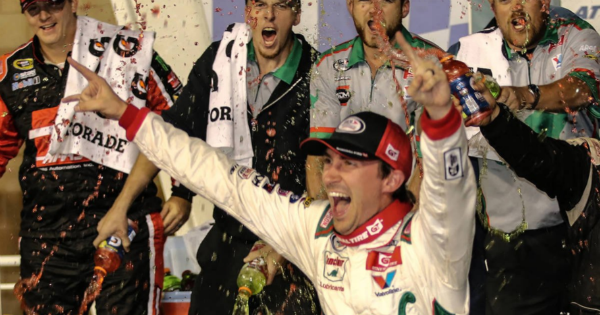 Michael Self, the veteran stock car driver who has tried his hand in the Xfinity series, has signed a deal to race in ARCA series for Venturini Motorsports, he announced in a press release.

Self, 27, will appear in 10 races this season, the first of which will be at Daytona on Feb. 10. He’s being sponsored by the Sinclair Oil Corporation.

With nine career ARCA starts to his credit, Self broke through in 2017 earning his first series victory during the season finale at Kansas Speedway. During his ARCA career, Self has notched one win, five top-fives and five top-10 finishes. In 2017, Self also competed in 13 NASCAR K&N Pro Series West events where he earned two victories, seven top-five and 13 top-10 finishes.

Self, 27, who made his ARCA Series debut with VMS in 2014, returns to the Toyota-backed team for 10 races in 2018, beginning with the highly anticipated season-opener at Daytona International Speedway on Feb. 10.

?I couldn?t be more excited to return to the ARCA Racing Series in 2018 with Sinclair Oil and Venturini Motorsports,? said Self.  ?I think we?ve aligned several prominent forces both on and off the track for this program, and that gives me a lot of confidence as we prepare for Daytona. I?m proud of the results Sinclair and I had in the six ARCA races that we did together last year, especially getting to Victory Lane at Kansas Speedway, and I?m excited to build on that this year. Sinclair Oil has given me some amazing opportunities to race competitively, and by pairing them with the Toyota-backed Venturini Motorsports team, I believe those opportunities will only be greater, as will our presence with the fans.?

?Michael (Self) is a professional in every sense of the word,? said team owner Billy Venturini.  ?He?s a great addition to our organization and I have high expectations for him this coming season.?

With nine career ARCA starts to his credit, Self broke through in 2017 earning his first series victory during the season finale at Kansas Speedway. During his ARCA career, Self has notched one win, five top-fives and five top-10 finishes. In 2017, Self also competed in 13 NASCAR K&N Pro Series West events where he earned two victories, seven top-five and 13 top-10 finishes.

?We couldn?t be more excited to partner with Michael Self again in 2018,? said Jack Barger, VP of Marketing with Sinclair Oil.  ?Michael?s consistently strong performance in 2017 and the renewed partnership with Toyota and Venturini Motorsports creates an exciting platform for this ARCA season.?

The newly formed partnership between Self, Sinclair Oil and Venturini Motorsports also offers nostalgic value for both team and sponsor. The Venturini family?s long history of operating gas stations in the Midwest and Southeast started when the late Tony Venturini purchased the rights to his first gas station ? a Sinclair Oil Service Station ? which he owned and operated in Chicago between 1946-1970.

Following in his father?s footsteps, Bill Venturini Sr. continued the family tradition of racing and working in the gasoline business ? owning and operating his own service stations until 2004.

?In over 40 years of racing I can?t recall another sponsor coming through our doors in which I?ve felt this strong of emotional connection with,? said team and family patriarch Bill Venturini Sr.

?Having Sinclair Oil with Michael Self join our program means the world to me. It brings back so many great memories of my childhood. My first time in the seat of any car was racing around the gas pumps at my dad?s Sinclair Oil Service Station in my go-kart which he owned when he started his racing career in the 1950?s. The Sinclair brand has always been special to me and our family.?

?This is how I started in business ? my livelihood has been the gasoline business and racing ? nothing else,? added Venturini.