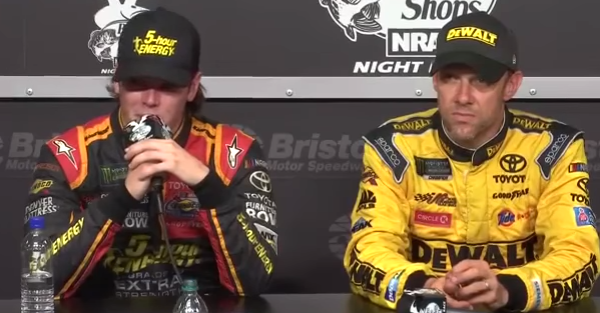 It hasn’t been easy for Matt Kenseth, a classy driver who’s losing his No. 20 on the Joe Gibbs racing team to Erik Jones next season. So an incident at Bristol could have turned ugly, but instead, Kenseth quickly diffused it.

The incident has been widely reported; the aftermath has not.

RELATED: Matt Kenseth a victim of a changing NASCAR landscape.

The incident in question happened at Bristsol when Kenseth and Jones were battling for position late in the race when Jones used his bumper to nudge aside Kenseth. Jones finished second in the race, and Kenseth — still fighting for a playoff spot — fourth.

After the race, Kenseth and Jones sat next to each other, and Kenseth said this:

?Takes my ride and runs into me.”

At least Kenseth still has a sense of humor.