Martin Truex Jr. taken aback by a comment from a prominent NASCAR leader 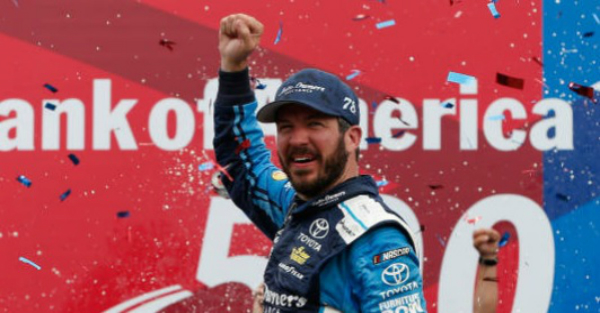 Martin Truex Jr. has been driving in the NASCAR Monster Energy Cup Series as a full-time driver since 2006.

But over the past few years with Furniture Row Racing, more specifically when they switched from Chevy to Toyota, his career has kicked into high gear.

The 2017 Cup Series champion has 15 wins in his career, with eight of those coming last season and another three in 2016. Since the move to Toyota, he has captured 11 of his 15 wins, an astronomical number to say the least. With capturing the title last year, he could be on his way to the NASCAR Hall of Fame one day, but until recently the thought hadn’t really crossed his mind, according to NBC Sports.

RELATED: Martin Truex Jr. has his championship paint schemes for 2018

Recently Truex and his foundation visited Levine Children?s Hospital in Charlotte and mentioned that Winston Kelley executive director of the NASCAR Hall of Fame usually joins them. Truex said while the two were talking, Kelley tapped Truex on his shoulder and told him something that blew his mind.

“You know, you?re pretty much a lock to get in here (the NASCAR Hall of Fame) now,” Kelley said.

Truex will look to defend his title beginning with the season opener at the Daytona 500, a race which he has never won. In-fact Truex has never won at Daytona as a Cup Series driver, but did finish in second at the 2016 Daytona 500.