Martin Truex Jr. thought he was going to choke to death after winning the championship 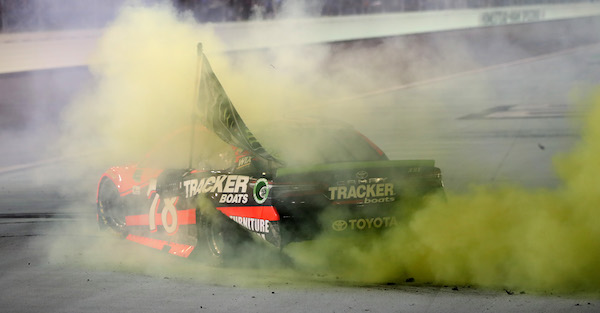 When Martin Truex Jr. won his first championship on Sunday, he took his winning 78 car for a celebratory burnout.

Those burnouts usually result in a ridiculous amount of smoke that’s usually white, but when Truex did his burnout, there was a strange greenish-yellow smoke that appeared from the car.

Burn it down one last time this season, MTJ.

Related: Martin Truex Jr. had a lucky charm in his pocket during his championship race

Truex was obviously in a great mood after his win, but he did get serious for a moment when discussing the smoke coming from his car. He was asked if he had spoken to team owner Barney Visser ? who couldn’t attend the championship race since he had bypass surgery two weeks ago followed a heart attack ? and he told reporters he wasn’t too keen on the added smoke.

“I talked to (Visser) as soon as I got done filling my lungs with purple or yellow ? whatever color paint that was ? on the front straightaway smoke,” Truex said via For The Win. “Oh my god, I literally thought I was going to die getting out of the car. I couldn?t get my radio unhooked and my helmet hose, and I?m like choking to death. So right after that. It was awful. I thought I was in a forest fire.”

The smoke was pretty much the only thing that didn’t go Truex’s way on Sunday. He won his first career championship by holding off a late surge from Kyle Busch, and he capped off a dominant, eight-win season with the victory at Homestead.