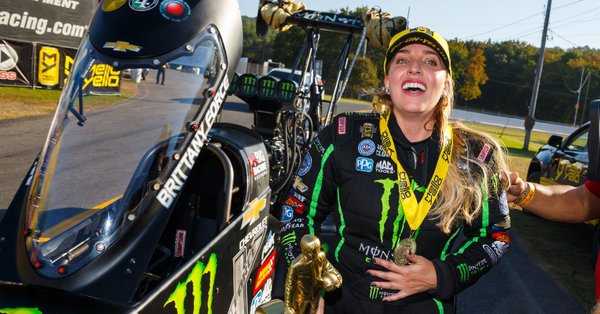 The American Auto Racing Writers and Broadcasters Association have announced their selection for Driver of the Year and the results are slightly surprising.

They are giving the Titus Award to not only one, but two drivers as they tied in the vote getting. Brittany Force and Martin Truex Jr. will be sharing this year’s honors. In addition the AARWBA has named their All-America team, according to NBC Sports.

Force became the first female to win a NHRA Top Fuel championship since 1982 when Shirley Muldowney won the final of her three titles. She won four races en route to her first championship. She’s the daughter of John Force, the winningest driver in the history of the NHRA.

RELATED: Martin Truex Jr. lets one of his major sponsors feel the burn ? in a good way

Truex Jr. won eight races on the way to his first NASCAR Monster Energy Cup Series championship. In addition he had 19 top-5 finishes with 26 top-10’s.

“It?s such an honor to be included on the All-America Team by the American Auto Racing Writers & Broadcasters Association,” Force said in a statement. “To be mentioned alongside so many influential names in the motorsports world is an accomplishment in itself and that is something I am very proud of.”

The AARWBA was established in 1955 and is an organization made up of writers, broadcasters, photographers, and other media-related professionals.