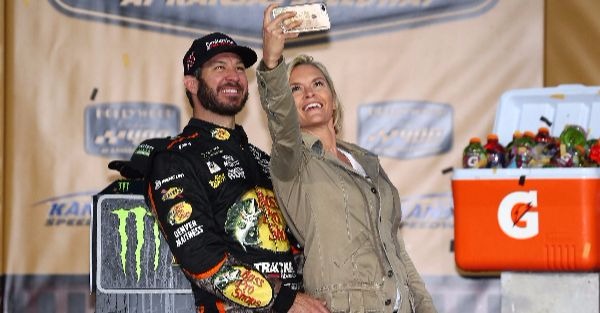 Add one more title behind Martin Truex, Jr?s name for 2017. The NASCAR Cup champion has been named Mile High Sportsperson of the Year, according to milehighsports.com.

?What Martin Truex Jr. and Furniture Row Racing did this year was not only unprecedented for the team and the state, but it was hands down the best sports story of the year,? said Doug Ottewill, editor-in-chief of Mile High Sports Magazine. ?What he had to go through personally, what the team had to overcome along the way ? all of it made our choice for Sportsperson of the Year an easy one.?

In addition to Sportsperson of the Year, fans also voted Truex, Jr. Colorado?s Fan Favorite Athlete. That?s saying something in a state not known for a large NASCAR fan base and competing against sports stars in the NFL, MLB, NHL, and NBA.

?Individual honors in a team sport are a result of the people you are surrounded with,? said Truex, Jr. to NASCAR.com. ?I feel blessed to be part of an outstanding organization led by our owner Barney Visser, team president Joe Garone and crew chief Cole Pearn. These honors represent the hard work by the talented individuals at our Denver race shop. I want to thank Mile High Sports and all our passionate Colorado race fans for the support they have given our team through the years.?

Furniture Row Racing is the only NASCAR team based west of the Mississippi, a distinction that seems to make this championship all the sweeter for team owner Barney Visser.

?I guess we have heard ?that?s impossible, you will never do that? for the last time,? said Visser. ?We are very proud of our Denver roots and to receive these prestigious awards in our home state makes it even more special. The Colorado fans have been loyal followers of our team and we are honored to bring a major championship to the state.?

Earlier in December, Truex, Jr. was honored by his native state of New Jersey when they also named him Sportsperson of the Year.