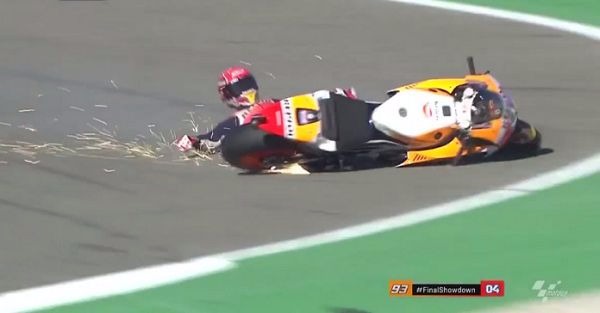 Under normal circumstances, a motorcycle crash is one of the most terrifying events that a person can witness, but that isn’t always the case in MotoGP thanks to the advanced safety equipment worn by its riders.

The latest example comes courtesy of Honda rider Marc Marquez. While qualifying for the Valencia Grand Prix, Marquez lost control of his bike in Turn 4 at the beginning of his second qualifying run. After his body made contact with the pavement, you can see sparks pop up as result of the friction between man and asphalt. However, Marquez quickly jumped to his feet and chased down the bike, looking no worse for wear.

In fact, Marquez actually captured the pole in Valencia with a time of 1m 29.897s in his first qualifying attempt. Marquez’s closest competitor in the championship standings, Andrea Dovizioso, only managed a 9th-place qualifying effort, according to Motorsport.com.

Heading into the final race of the season, Marquez has a 21 point advantage over Dovizioso. For Marquez to capture his fourth MotoGP title in five years, all he needs to do is finish inside of the top-11.

Dovizioso did manage to win the last event in Malaysia in order to set up this championship showdown in Spain, although he’ll need almost everything to go his way to earn the MotoGP title.

The Valenica Grand Prix will start at a.m. on Sunday.