Kyle Busch offers advice to one of his drivers, who makes a Twitter blunder 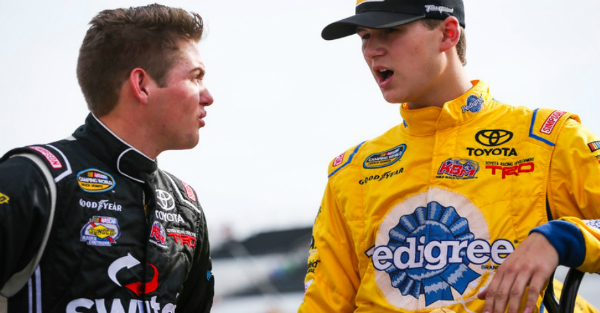 It’s nearly impossible to navigate your way through social media and make a mistake without it being brought to your attention. Even more so if you’re a NASCAR driver and your boss picks up on your mishap.

RELATED: Noah Gragson might want to find another way to celebrate after his first truck win

Kyle Busch Motorsports driver Noah Gragson decided to do a nice thing for some fans. He had a few hoods from the 2017 season that he signed and left at the KBM retail store for a few lucky fans to come pick up.

Signed these two SWITCH Tundra hoods from the 2017 season. They are over at @KBwebteam store at KBM. Go get em!

While he apologized for the poor photo quality in his post, the disclaimer wasn’t enough for Kyle Busch. He told his young driver he’d had enough already and it’s time to get a new phone.

Son… go get a new phone. Been too long w that damn camera. https://t.co/6VJu6PEOXC

Gragson won his first race last year, so we know he’s got at least a little bit of cash to get a new phone. Maybe now that the boss has spoken up he’ll get around to making it happen.