Kyle Busch complains that a rival cost him the championship 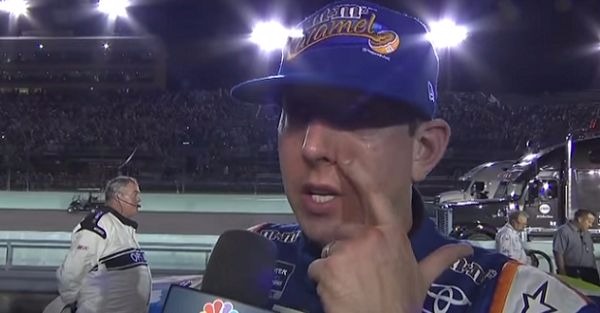 Martin Truex Jr. had the best car all year, but Kyle Busch essentially caught up in terms of speed by August, which made Sunday’s season finale at Homestead a must-watch event for NASCAR fans.

It was like watching two boxers duke it out during the prime of their careers, but unlike boxing, where Saul Alvarez and Gennady Golovkin recently fought to a draw, there are no ties in NASCAR. So racing fans would finally get to see who the best driver really was in 2017.

It all unfolded like a dream scenario for NASCAR. With 34 laps remaining in the EcoBoost 400, the caution flag waved after Kyle’s brother Kurt spun out, bringing most of the field down pit road. Entering the pits in fourth, Busch exited in third place, which was the ideal spot for him to try and run down Truex for the championship.

There was only one problem, though. After Busch fell back to fifth following the restart, he spent a considerable amount of time trying to get around Joey Logano’s Ford Fusion before he could make a run at Truex.

After he eventually passed Logano, Busch climbed as high as second, but ran out of time and Truex won the race by .681 seconds.

When Busch was interviewed NBC after the race, he pointed towards his encounter with Logano as the reason why he failed to claim his second Cup Series crown.

“Battling with the No. 22 there. Just wasting too much time with him. He held me up,” Busch said, according to Motorsport.com. “He was there blocking every single chance he got, so got a real buddy there.

?We gave it all we had, we gave it our all. They deserved it?probably like any other race?but today, I thought we were better. Doesn?t matter, they were out front when it mattered most. It?s just unfortunate for us that the caution came out and ruined our race strategy and we couldn?t get back to where we needed to be. Then I had to fight too hard with those other guys, but that?s just racing. It happens.”