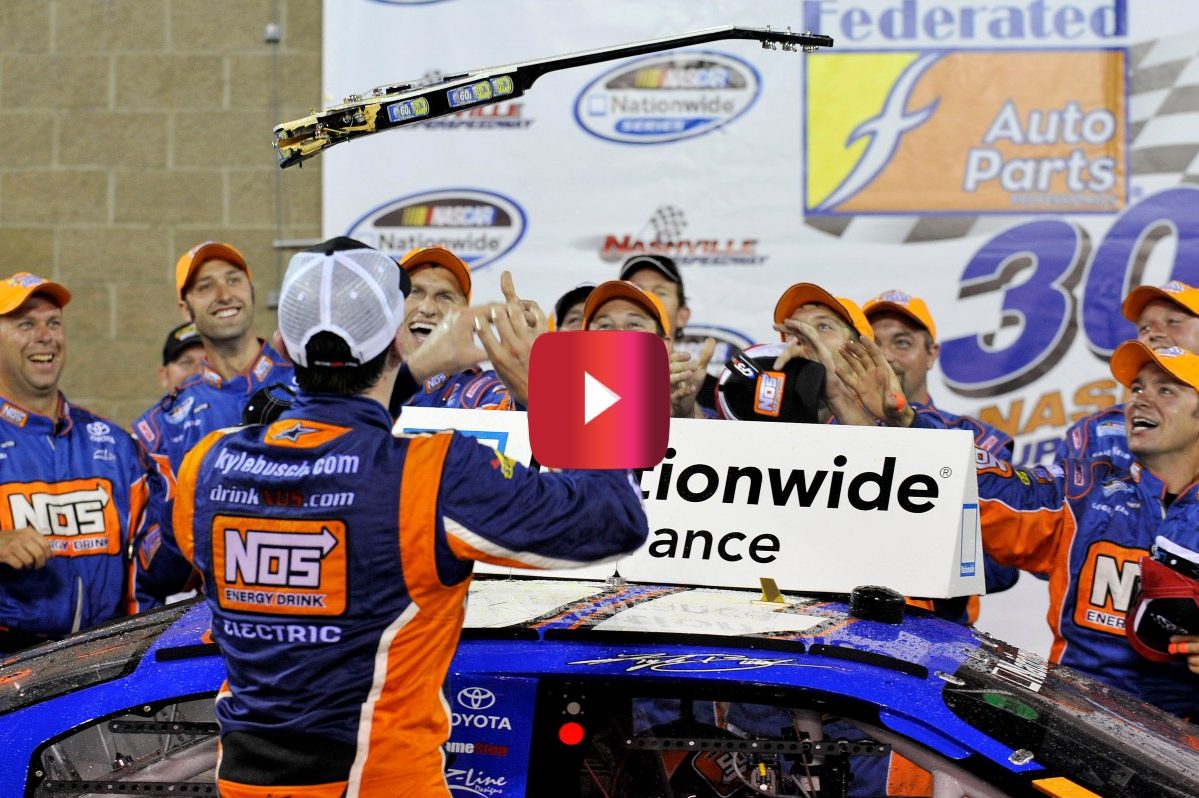 Of the various ways NASCAR drivers have celebrated their victories, Kyle Busch certainly set himself apart after his 2009 win at the NASCAR Nationwide Series race at Nashville Speedway. The award for this particular race happened to be a hand-painted Gibson Les Paul guitar trophy, however, the Joe Gibbs Racing driver wanted everyone on the team to get a piece of the trophy.

Busch got a quick photo of the guitar alongside artist Sam Bass, but decided to smash it on the ground of victory lane in the same fashion a rock star would. A controversial move for sure, but it was bound to draw some attention. Busch’s celebration received some attention from Associated Press for quite a while following this, with some NASCAR fans being supportive and others giving him heat for it. Check out the clip below and witness the entire moment for yourself.

Read More: Carl Edwards Opens Up About Why He Won?t Make NASCAR Comeback

The then 24-year-old Busch stood by his actions at the end of the day, despite the backlash. He was asked if he regretted imitating Pete Townshend. In the interviews that followed, he stated he regretted nothing, that it was in the spirit of Rock N’ Roll, and it was a fun time. There’s no denying that guitar gave him a little bit of trouble, though. I think that Gibson was a little tougher than he expected.

As if he hadn’t stirred things up enough, he then pokes Dale Earnhardt Jr. fans by commenting, “A lot of people hated it, and I guess those are the ones with 88 tattooed on their arm, or maybe still 8s.” He did clarify shortly after, “I?ve got no issues with Junior; it?s his fans that are crazy, but that?s all right.”

While some fans were heartbroken over Busch smashing the Les Paul trophy like it was some cheap prop guitar, Busch had good intentions in mind. Plus, this just kind of goes right along with his wildcard bad boy persona that he displays both on the race track, and off of it. He’s always an interesting race car driver to keep your eye on, and he proved that once more with this Nationwide victory.

That’s one way to make your mark in Tennessee. I’m sure the PR team wasn’t exactly thrilled, but if we’re talking about Kyle Busch, it likely didn’t come with much of a surprise. Ultimately, the guy earned his victory and that trophy, so while it was unorthodox, it was still a pretty memorable celebration overall.