Chad Knaus criticizes Kasey Kahne after his dismissal from Hendrick 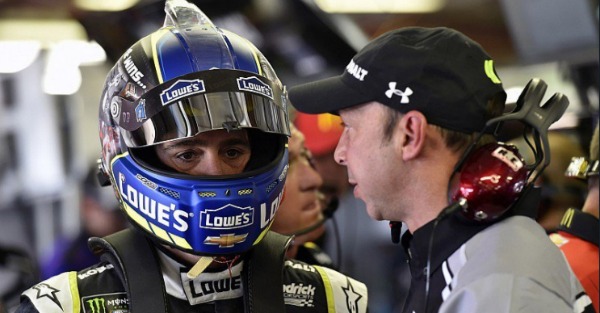 When the news broke that Hendrick Motorsports would immediately free Kasey Kahne from his contract — making him a free agent — everyone said the right thing, most likely out of respect for a veteran racer who has had a terrific career.

Kahne thanked Hendrick, and Hendrick called him a special talent (statements below). His teammates, in a serious of tweets, all rallied around him.

Then, Chad Knaus — the crew chief for the No. 48 driven by Jimmie Johnson — got involved.

Here’s what he had to say, with remarks on TV:

He’s pleasant, he’s a great race car driver, he brings a lot to the table from a lot of different aspects. Unfortunately this is a performance based industry and .. we just haven’t had the performance out of that team as we would have expected and it stinks because they just won the Brickyard 400, I mean, he just won that race. And, it’s too bad, I do honestly think the 5 car will continue to go out there and compete potentially win more races. Getting into the chase I think they have the opportunity to perform very, very well, and it’s going to be sad to see  him go, I know he’s going to do a good job and I know he’s going to land somewhere great.

Contrast that to what Jimmy Johnson tweeted:

Wishing @kaseykahne all the best, he's been an amazing teammate and friend.

Granted, there’s nothing inaccurate about what Knaus — Johnson’s crew chief — said. You just have to wonder why he decided to call out the performance of Kahne and his team when no one else did.

Hendrick, in an effort to get younger, is replacing the 37-year-old Kahne with 19-year old William Byron.

Kahne’s teammates rallied around him in a series of tweets that shows how close the Hendricks squad it.

.@kaseykahne is a great friend and fit into the @TeamHendrick system seamlessly. I look forward to seeing what he achieves going forward. 👊🏼

This is an understatement. Still lots to go this year though! @kaseykahne https://t.co/VWSQJUtBDC

.@kaseykahne has been awesome to lean on and learn from. Wishing him the best for 2018 and beyond and I'm sure he'll finish 2017 strong!

Kahne noticed, and lauded his teammates.

I've always enjoyed working with teammates but my three HMS teammates are as good as it gets. Let's finish strong guys! pic.twitter.com/mkNRCBp6va

On Monday, Hendrick Motorsports  announced in a press release that it would release Kahne, the 2004 Rookie of the Year and this year’s Brickyard winner, from his contract.

Byron is all  of 19-years-old, and his rise through the NASCAR ranks has been stunning, He’s now a rookie in the Xfinity Series, where he’s won three races. Before Xfinity, he  drove for a season in the Truck Series.