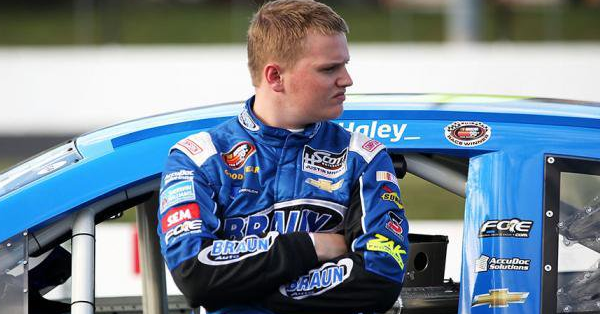 What a day for Justin Haley.

The 18-year-old will return to GMS Racing and driver the No. 24 Chevrolet Silverado in the NASCAR Camping World Truck Series, the team announced in a press release.

The team also announced that the Fraternal Order of Eagles will return as full-season sponsor.

Blessed for the opportunity to be back in the #2FOE, full time with GMS @Nascar Trucks in 2018! @FOEGrandAerie @GMSRacingLLC @NASCAR_Trucks pic.twitter.com/o9AfKOOmxr

GMS Racing announced that Justin Haley would once again pilot the No. 24 Chevrolet Silverado in the NASCAR Camping World Truck Series (NCWTS) in 2018. Long-time sponsor Fraternal Order of Eagles will also rejoin the group as a primary sponsor throughout the season.

The 18-year-old returns to the team following a strong rookie season in which he earned three top-fives and 12 top-10 finishes in 21 starts. He also captured his first-career NCWTS pole award at Texas Motor Speedway in November, setting a new track qualifying record and becoming the youngest pole winner in track history.

Haley, who won the ARCA Racing Series event at Talladega Superspeedway and contended for the win in his NCWTS debut at the same track, will make his first start at Daytona International Speedway. In addition, Haley has yet to make a start at AtlantaMotor Speedway, but earned an average finish of 10.5 in eight 1.5-mile starts in 2017.

?We found a lot of success toward the end of the 2017 season, so there?s a good amount of momentum that we can carry over into this year,? said Haley. ?The No. 24 team is working hard in the off-season to take us to that next level, to be able to keep running up front and improving week to week. There?s no reason we shouldn?t be competing for a championship when we get to Miami, and I couldn?t be more excited to be heading in that direction with GMS and the Fraternal Order of Eagles.?

Looking to build on the consistency from 2017, the No. 24 crew will be led by Kevin Bellicourt, now in his second season as crew chief with GMS and Haley.

?It?s been really encouraging to see the work that not only this team has done, but that Justin has put in over the off-season,? said Bellicourt. ?From working in the gym to time on the simulator, he?s focused on getting himself prepared to make a run for the title. The team has put everything we?ve got behind him and we?ve watched him do the same. It feels like all the pieces are coming together at the right time.?

Haley and the No. 24 team will contend for GMS Racing?s third consecutive Daytona International Speedway season-opening win. Coverage will be broadcast live Friday, February 16th on FS1 and MRN at 7:30 p.m.