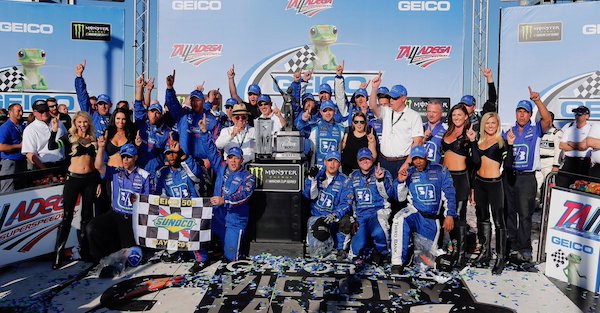 There are certain places where jumping fences is extra inappropriate, like the White House, but people still try. Now, Ricky Stenhouse Jr.’s dad has added NASCAR tracks to that list.

The younger Stenhouse’s win at the Geico 500 in Taladega last Sunday was unlikely; it’s not like the NASCAR driver was on a winning streak. Stenhouse Jr. hadn’t won a race in 157 cup-level attempts. But when he made the final push to win the race in Taladega, his dad, Ricky Stenhouse Sr., couldn’t contain himself and seemed to immediately make a decision that he needed to be as close to his son as possible.

Father Stenhouse jumped the fence at turn three and took off for the victory lane, but, there being security on NASCAR tracks, he was promptly caught and placed, probably less than delicately, into a security car. Fortunately for Stenhouse Sr., he was soon recognized and taken to his son.

Think he won’t try it again? Think again. According to YahooSports, Stenhouse will be given the opportunity to jump the fence at future races, too. No way this can end poorly.

Related: A fight is going to break out at a NASCAR race, just not one you would expect