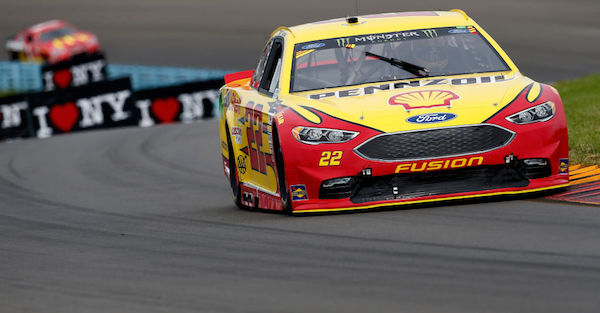 Time is running out on Joey Logano’s playoff chances for this season. Logano is 13th in the standings, and Sunday’s 24th place finish at Watkins Glen certainly didn’t help his case.

He knows what he has to do to make the playoffs: WIN. pic.twitter.com/CTg679K2Sk

With four races remaining, 13 different drivers have secured a bid for the postseason. The three winless drivers who would be in the field if the postseason started today are Chase Elliott, Jamie McMurray and Matt Kenseth. Clint Bowyer and Joey Logano are the first two drivers out, but they trail Kenseth by a decent margin.

Logano told USA Today prior to Sunday’s race that he felt like Watkins Glen was perhaps his best shot to win a race over the remainder of the season, but he likes his chances at tracks such as Bristol, Darlington and Richmond.

Logano technically does have a win this season at Richmond, but it was an encumbered win after he failed a post-race inspection.

Logano’s poor finish was made worse due to the other winless drivers in front of him having much better days. Matt Kenseth finish second in the race and is only six points behind Jamie McMurray and 11 points behind Chase Elliott. McMurray finished 14th, while Elliott finished 13th.

Clint Bowyer also had a strong day as he finished fifth. He is 28 points behind Kenseth and 67 points ahead of Logano.

The last four races should provide plenty of drama, but Logano will still likely need a victory to earn another trip to the postseason.