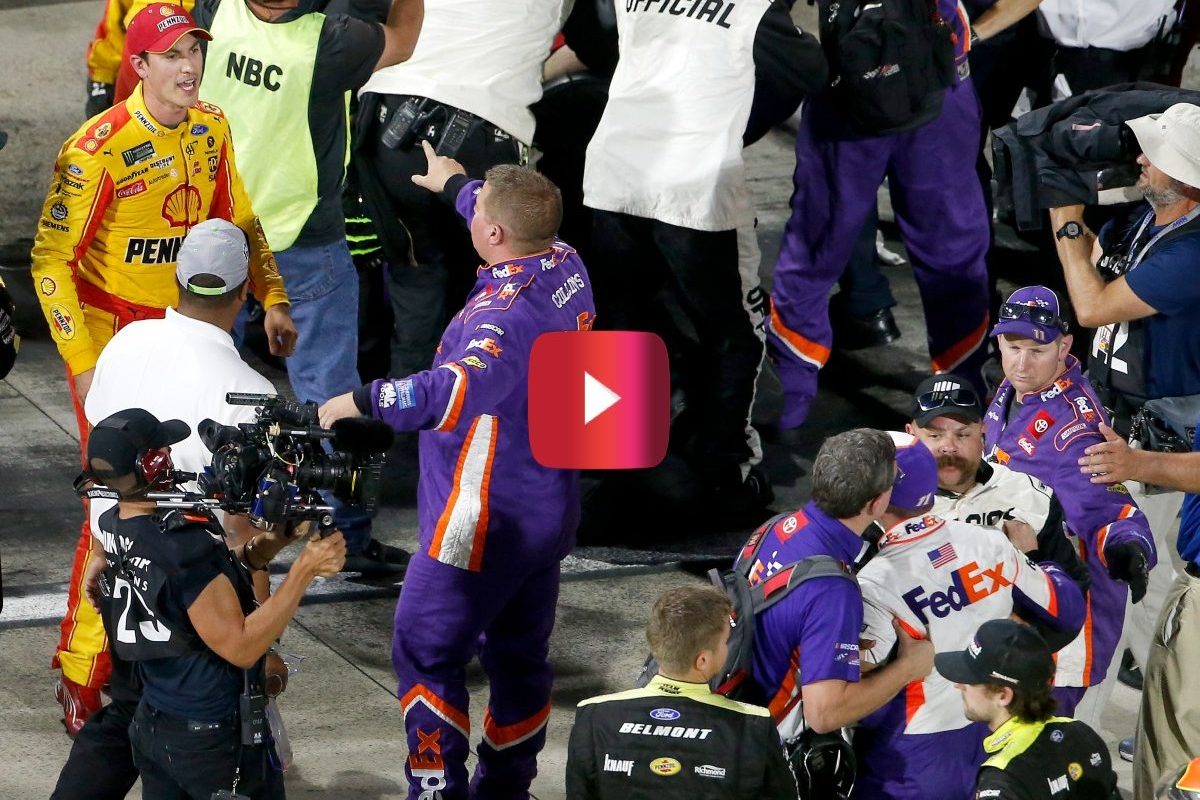 Back in late October 2019, NASCAR suspended Team Penske crew member Dave Nichols Jr. for one race for his involvement in the Joey Logano vs. Denny Hamlin scrap at Martinsville Speedway. According to Logano’s crew chief Todd Gordon, Nichols, who is a tire specialist for Logano’s team, was trying to separate the two drivers, but did so too forcefully by grabbing Hamlin from behind and throwing him to the ground.

“The direction that our organization has is separate drivers,” Gordon said on SiriusXM NASCAR Radio. “We don’t want to have drivers beating on each other.”

“Unfortunately, in this situation that happened there, the separation was with too much power afterwards and I don’t think the crew member…he was trying to separate the drivers and did so with probably more force than he anticipated and he’s regretful of that.”

What started as a seemingly civil conversation between Joey Logano and Denny Hamlin after the 2019 NASCAR Cup Series Round of 8 opener at Martinsville Speedway ended in a heated scuffle that neither drivers probably saw coming. After Martin Truex Jr. cruised to victory at the First Data 500 on October 27, Logano and Hamlin stood in front of Logano’s pit box and discussed Hamlin’s decision to push Logano’s car into the wall.

As Logano started to walk away, it seemed like that would be that, but tempers flared after gave Hamlin a hard parting shove, leading to a scrap between both teams.

Following the pit road altercation, Hamlin gave his side of the story.

“We were having a discussion, and everything was civil. And then like Joey does, he does a little push and then runs away,” Hamlin said.

Logano himself chimed in, adding, “I just wanted to talk to him about (the on-track incident). I was pretty frustrated. He kind of came off the corner like he didn’t have a car on the outside of him. It ruined our day. We had a shot at the win for sure.”

Two sides to every story.

Hear from Joey Logano after his post-race altercation with Denny Hamlin. #NASCARPlayoffs pic.twitter.com/7TVEitWNFf

Not surprisingly, NASCAR officials weren’t thrilled about the Martinsville brawl. Before Nichols’s suspension was made official, NASCAR Executive Vice President and Chief Racing Development Officer Steve O’Donnell said on NASCAR radio that a penalty would likely be coming as a result of the fight.

“We know emotions are going to run high, especially at this time of the season,” O’Donnell said. “We don’t encourage it, but we know the drivers are going to address each other after the race when they have an incident. Then unfortunately, instead of breaking up a fight, I think what we saw was an aggressive move by a crew member.”

“I think in this case, you have a crew member who was maybe trying to break it up, but certainly an aggressive move we viewed on our part and unfortunately, we’ll probably have to take some action to address that today or tomorrow.”

And, as we all already know, that “action” O’Donnell was talking about was eventually taken in the form of a suspension.