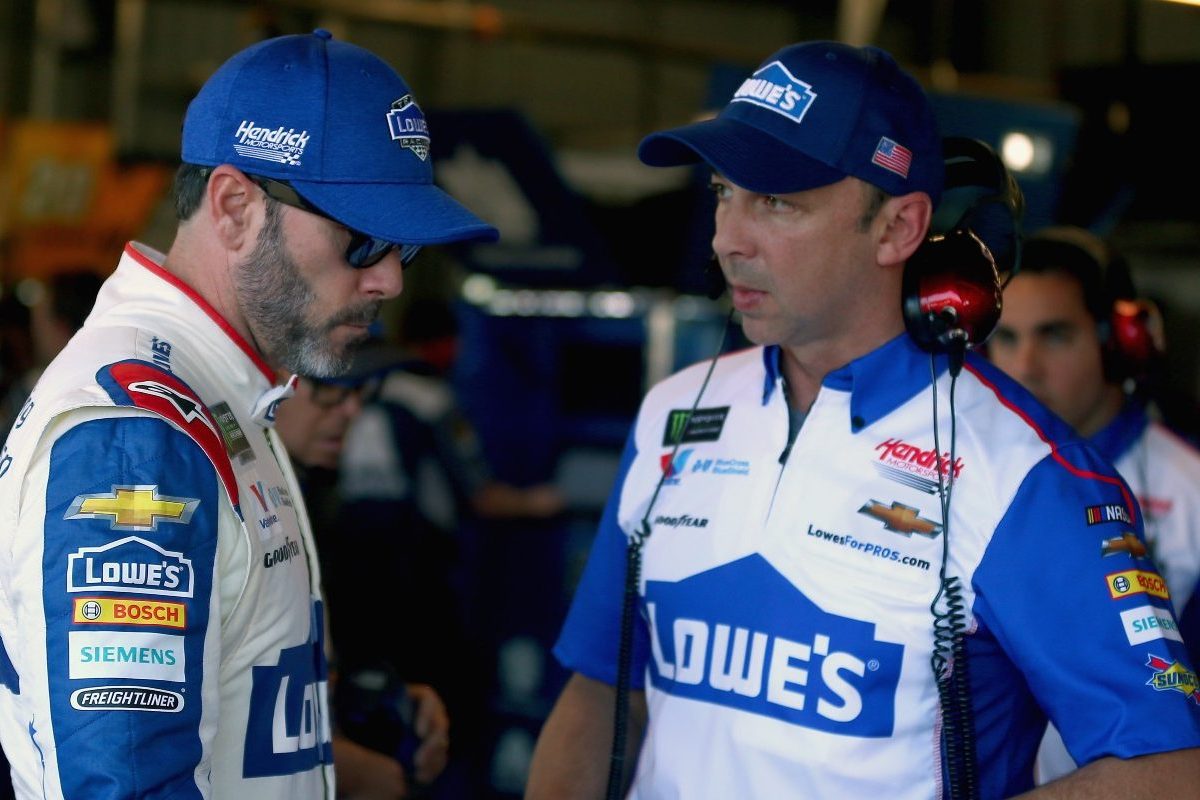 BRASELTON, Ga. (AP) — Jimmie Johnson stood at the doorway of the lounge inside a team transporter casually eating from a can of Pringles. Upon noticing his arrival, Chad Knaus spun in his chair to confront the driver he teamed with for seven NASCAR championships.

“Apparently you and I need to have a discussion,” Knaus said to Johnson. “I’m going back to Charlotte.”

“I’ve heard this before,” Johnson laughed.

Knaus moments earlier had learned of an interview released last week in which Johnson made unintentional headlines in a longform profile for “In Depth with Graham Bensinger.” Among the soundbites promoted ahead of the television program was “Johnson unveiled specifics of his rift with former crew chief Chad Knaus, which eventually eroded their relationship and forced a separation.”

Johnson and Knaus won 81 races together, as well as a record-tying seven Cup championships and a record five-straight from 2006 to 2010. Their relationship had always been up and down, and Rick Hendrick famously served the two milk and cookies following the 2005 season and ordered them to stop fighting like a pair of little boys or he’d split them apart.

The breakup didn’t actually come until 2018, when the crew chief was moved from the No. 48 team he’d built 17 years earlier following two-plus losing seasons.

“When times got tough, Chad reverted back to the crew chief that he was when we first started,” Johnson told Bensinger. “Micromanaging, explaining where I was making mistakes, what I needed to do, how I needed to work on it.”

The tense relationship unraveled, Johnson claimed, at the start of the 2017 season when he informed Knaus he wanted to live in Colorado — almost 1,800 miles away from Hendrick Motorsports in Charlotte.

“And things started to get personal then,” Johnson told Bensinger, “and him questioning where my heart was with the team and the time and effort I wanted to spend to be with the team was really kind of the starting fracture point.”

Read More: Jimmie Johnson Dressed Up Like 2 Racing Legends Before One of His Final NASCAR Races

Johnson’s quotes published ahead of the show release made headlines in NASCAR but Knaus had heard nothing of the interview until asked about it during an interview with The Associated Press at the Petit Le Mans sports car race at Road Atlanta.

Johnson retired from NASCAR after the 2020 season and spent this last year as an IndyCar rookie and dabbling in IMSA sports cars, and Knaus is the strategist for the No. 48 Cadillac that Johnson and Hendrick Motorsports assembled to run in four endurance races.

“I mean, I thought we’re fine,” a confused Knaus initially responded when asked by AP.

It took several attempts to explain the context of Johnson’s comments, and then Johnson at last arrived, blindsided by the conversation he’d just entered. He explained to Knaus “a headline writer” had picked a handful of soundbites from a lengthy, in-depth interview “as clickbait, to get traction for the show,” and that his remarks were about their relationship three years ago.

Knaus wasn’t actually upset and a restless Johnson, after eating a second can of Pringles and then a bag of cool ranch Doritos all while standing in the lounge doorway, went looking for something else to do during the long day of waiting around at the track.

It left Knaus to now himself revisit the breakup of arguably the best driver-crew chief combination in NASCAR history.

Johnson drove just one more season in NASCAR following the split, and Knaus was crew chief for another driver for just the one year. He’s now management at Hendrick and the vice president of competition.

“It was work, it was tough, right? I mean, we’ve gone through it and there was many a time we had to do maintenance on our relationship,” Knaus told AP. “But every relationship needs maintenance, period, and we went through an ebb and a flow throughout our career. Even when the times were good, they weren’t always good, right?”

But yet they always pulled through and both remained committed to tying Hall of Famers Richard Petty and Dale Earnhardt with seven Cup titles. They hit the mark in 2016 and even though Johnson won three of the first 13 races the next season, he and Knaus were headed toward a final breaking point over Johnson’s desire to move his family to Colorado.

“You know, the Aspen thing, man, look, it is what it is,” Knaus told AP. “It’s hard from my perspective. I am older now and I am in a different place. But when I look back and look at where I was at that point, I was in it and living it every single day and in the grind. And you can begin to feel like a single parent — the one the kid comes around for the weekend play, and you know, everything’s great, but the kid doesn’t want to play with them every single day.”

“That’s what that felt like going through that and it was challenging because (stuff) wasn’t going well and you feel like you’re in the storm by yourself.”

Knaus now supervises the four current Hendrick drivers, among them Chase Elliott, who has not moved from his Georgia hometown. When asked what made Elliott’s permanent address acceptable when Johnson could not relocate out of North Carolina, Knaus said it was situational.

He pointed to a period of time when Jeff Gordon at his heyday lived in Florida without it harming his career or relationship with crew chief Ray Evernham, as well as Elliott’s continued progression from rookie to 2020 Cup champion.

“It’s all about the environment and when everything’s going well, there’s not many problems to be solved,” Knaus told AP. “But if you’re not running well, everything is in question. And it’s a team sport and you get to a point where you feel abandoned. Nonetheless, I knew he was a fantastic racecar driver and he was going to give me everything he had every single weekend. Just like I did for him.”

Knaus later relocated to the Action Express pit stand to call qualifying for the No. 48 at Road Atlanta. Kamui Kobayashi qualified the car, so Johnson sat behind Knaus wearing a headset to listen to the session.

“Well, I was until I found out you hated me,” Knaus deadpanned.

The two began to laugh, both content with the current state of their relationship.