Writer predicts one of NASCAR’s remaining greats will shock the sport, in two ways 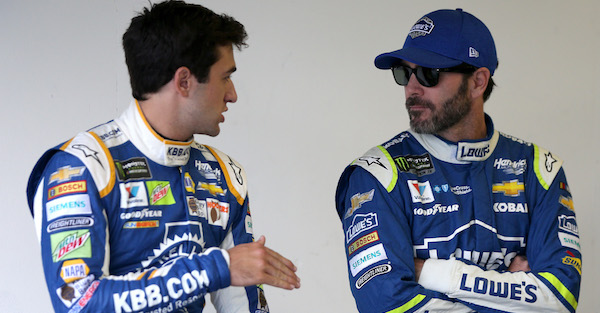 The new year is only days away, and the new NASCAR season is just around the corner.

He saved his NASCAR prediction for last, and it was among the more serious predictions he made.

Jimmie Johnson wins record eighth NASCAR Monster Energy Cup Series title, retires. Johnson surpasses Richard Petty and the late Dale Earnhardt Sr. for the most Cup titles, leaving the California native with nothing else to prove. His retirement leaves NASCAR without another bankable star and follows the retirement of teammate Dale Earnhardt Jr. in 2017.”

Related: A NASCAR Hall of Famer gets a new honor that ensures his name will live forever

Johnson made the playoffs and the Round of 8 in 2017, but he struggled over the second half of the season.

Perhaps the new Chevy Camaro will help him get back into title contention in 2018. The 42-year-old would surely like to break the tie with Petty and Dale Sr. for most championships in NASCAR history, but his time might be running out as the new generation of talented drivers is looking to take over the sport.

It certainly wouldn’t be that surprising to see Johnson win another title considering he already has seven and won in 2016. He will need to figure out what’s been plaguing his team over the second half of the regular season in the last couple of years, but he certainly has the team and skills to make adjustments and improve.