One of the top teams in NASCAR could split up 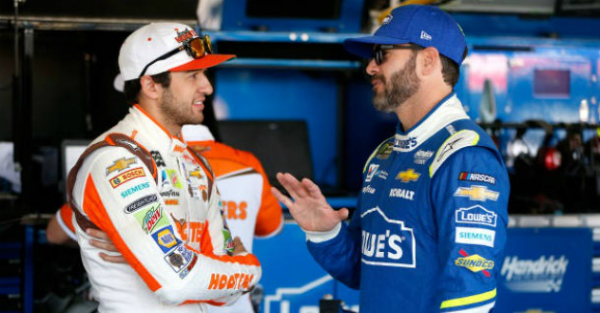 One of NASCAR’s longest running partnerships may be coming to an end.

Jimmie Johnson has had Chad Knaus as his crew-chief since his first full-time season in the Cup Series back in 2002. But there are a few things left undecided and the seven-time championship combo could be parting ways, according to motorsport.com.

During the middle of last season Johnson agreed to a three-year extension to continue to drive for Hendrick Motorsports through 2020, but there has been no such announcement involving Knaus.

RELATED: Analyst predicts one of NASCAR’s biggest names will not make the Championship 4

During interviews at this week’s media tour in Charlotte, Johnson seemed uncertain as to the future of Knaus.

“I feel like crew chiefs have always lived in dog years, and I’m not sure where he’s going to be,” Johnson said. “I think his contract is up at the end of this year.

“Of course I want him to push on,” added Johnson.

The pair have not only won seven titles, which is tied for the best in NASCAR history, but they’ve also won 83 races together, which sits them two wins away from sole possession of fourth most on the all-time wins list.

“I keep telling him, ‘Man, I started this with you, I want to finish it with you,'” Johnson said. “I’ll try to stretch him as long as I can.

“I guess I’m trying to subconsciously prepare that he’ll assume a different role at Hendrick, but I really don’t want to let that in,” Johnson added.

The pair are coming off a less than stellar 2017 season that saw them fall off in the second half of the year. They won three races in the first part of the season but failed to capture another checkered flag in 2017 after their win at Dover.

“We kept hoping every stone we turned over would help us find our problem,” Johnsn said. “What was so frustrating is I’ve never worked so hard in my life to get such little return, I know Chad can say the same and the team can.”

Knaus is in the final year of his contract so hopefully the two can make the best of it. If they can get over the hump there’s no reason Johnson can’t get back to championship form and compete for a record eighth championship.