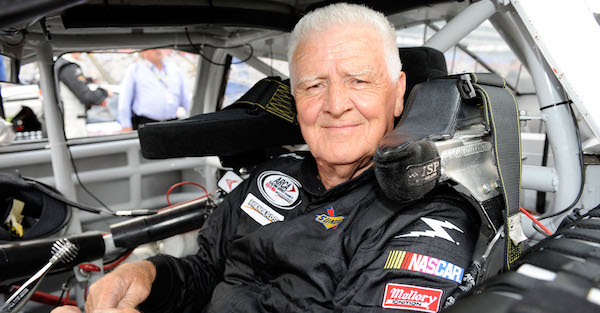 John Harrelson/Getty Images
during the ARCA Racing Series Rattlesnake 150 at Texas Motor Speedway on April 16, 2010 in Fort Worth, Texas.

James Hylton has been involved in racing for over 60 years, both as a driver and as a team owner. He won two Cup Series races in his career, and he raced for over three decades in the ARCA series.

Now, Hylton owns an ARCA team, and his team is impossible to miss when they roll in to the race track each week. Hylton used to have a heavy-duty pickup truck that he’d use to pull the trailer around to each race, but now his mode of transportation looks a bit different.

Hylton was driving back from Iowa Speedway on July 9 on Interstate 40 in his heavy-duty pickup with a trailer attached when he fell asleep at the wheel and crashed his truck. The truck actually ended up on the other side of the road facing oncoming traffic, and his son and team member were also in the truck.

Hylton told Yahoo Sports said it was “unbelievable” that the truck ended up on the other side of the road and never touched anyone.

Related: MotoGP champ somehow gets up after this scary crash

Hylton didn’t suffer any major injuries, but the truck, the trailer and the racecar inside the trailer were all severely damaged. The team had another race in 12 days, and they didn’t have the budget to simply replace everything in the blink of an eye. Time wasn’t on their side either, and while they received a loaner, it was only a temporary solution.

Sean Corr, who drove for Hylton in the past, called Hylton with an interesting solution. Corr’s dad, John, owns a bus transportation company, and Sean presented Hylton with an answer to his problems.

“Sean called me,” Hylton said, “and said, ‘I?ve got a school bus that you can have,’ and I asked ‘How much you want for it’ and he said ‘Take it and see if it?ll work for you and get you going again and it?s a donation.'”

Hylton said his team’s motto is that they don’t give up, and the fact that they are willing to drive a school bus to and from races each week is a testament to that mindset.

The story of why James Hylton, 83, is using a school bus to get his ARCA car to the track. https://t.co/5voeNnQa8M pic.twitter.com/JDVcAZHbip