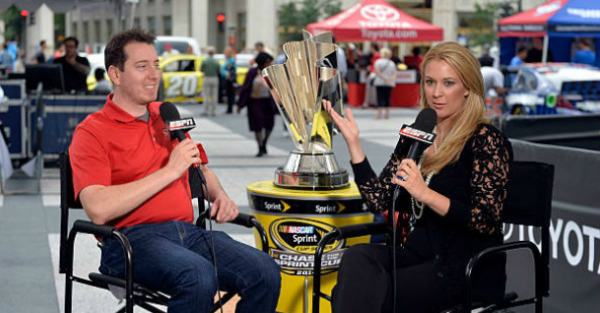 ESPN Sportscenter anchor Nicole Briscoe will be returning to a race she’s more than familiar with.

Briscoe has signed a multi-year extension with ESPN that includes hosting the telecast of the 102nd Indianapolis 500, which will include a one-hour pre-race special and bringing viewers back from commercial breaks, according to the Indy Star.

Briscoe is married to IMSA sports car driver Ryan Briscoe who is a former driver in the IndyCar Series. From 2007-2015 she was a regular in Ryan’s pit area at the race, according to autoweek.com.

RELATED: The IndyCar Series is making another major change for next season

Prior to her relationship with her husband she was a reporter for local Indianapolis WISH-TV and covered the rookie orientation of the event in 2004.

“I feel like this homecoming is a long time coming,” Briscoe said. “The Speedway has played such an important role in my life, professionally and personally, I cannot wait to be back and part of the 500.”

Briscoe is a huge fan of racing and has hosted various racing shows during her tenure at ESPN.

“What I want is for my genuine enthusiasm and genuine love for that event to shine through the lens and goes home to people watching,” Briscoe said. “Not everyone has a chance to be there and experience what I did back in 2004 at the hallowed ground of Indianapolis Motor Speedway for the Indy 500.”

“But just just because you?re not there doesn?t mean I can?t make you feel like you are and make you feel the same love and passion for it.” added Briscoe.

Her role in the broadcast will be a more significant one that Lindsay Czarniak, whom previously covered the event for the network.

“Nicole is a very talented and professional anchor, and we?re very happy she?ll be staying with us for years to come,” Norby Williamson, ESPN executive vice president and executive editor, studio production said. “That will include the Indianapolis 500. She has a reverence for the event and its history, and we look forward to having her as part of our coverage.”