It took 3,000 Horsepower, but this GTR won’t stop destroying records 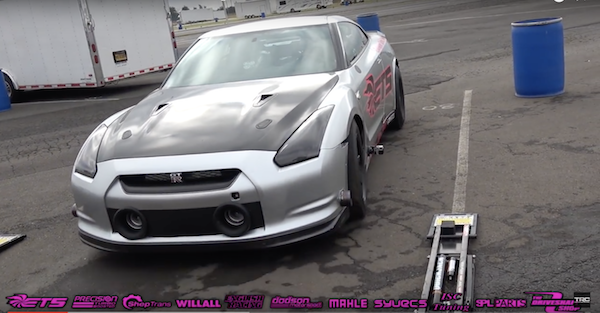 This GT-R is no stranger to breaking records as it was only a couple months back it set the record for the standing mile at 255 mph.  It also maxed out the ETS dyno at around 2700 horsepower, to the wheels!

In the video posted by That Racing Channel, we not only see the record setting pass, but also a pass that would make most people resort to wearing diapers while racing.

First up was a ?low power? run that resulted in “only” a 7.29 at 187 mph. Next they raised the boost higher than ever before and almost lost the car in 4th gear. The driver, Lucas English, is an absolute beast for keeping this car going somewhat straight. He comes dangerously close to destroying the car and hurting himself when all 4 tires lost traction, but he was able to save it. They waited until it was a little nicer out before making the 3rd pass that resulted in the record setting 6.88 at 222 mph.

ETS and AMS have been competing for GT-R titles for years now and its getting pretty ridiculous. What?s even crazier is that this car still looks somewhat streetable. It?s not insanely loud at idle, and even has what looks to be a working radio! Got to love technology.