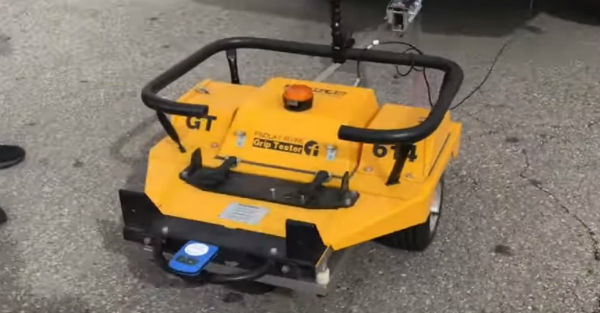 Some people might think NASCAR is just a sport with a lot of left-hand turns and driving in circles but it’s much more than that.

In addition to the skill required by drivers and their teams, there is quite a bit of science that goes on behind the scenes.

NASCAR writer Jeff Gluck shared a video to his YouTube account of a device known as the GripTester which is typically used on airport runways to gauge various data to safely allow planes to takeoff and land, according to griptester.us.

The GripTester is a highly reliable instrument for investigating accident sites, problem areas, and for predicting the safety of pavement surfaces, according to the company’s website.

NASCAR uses the device to collect data to analyze how much rubber is being left on the tracks and how quickly it does so. The GripTester is used in multiple grooves on the track to see how the data may vary per each individual groove. Thus far it has only been used at tests and has yet to be used for races.

RELATED: Chevy gets encouraging news out of the Las Vegas tests

The hopes are that it will eventually be able to diagnose if a track has dried after rain or measure effectiveness of the Tire Dragon, which is used to add a layer of rubber to a track.

The data collected from the device during testing is then shared with team so they can have a better idea of what they’re dealing with when it comes to the racing surface.