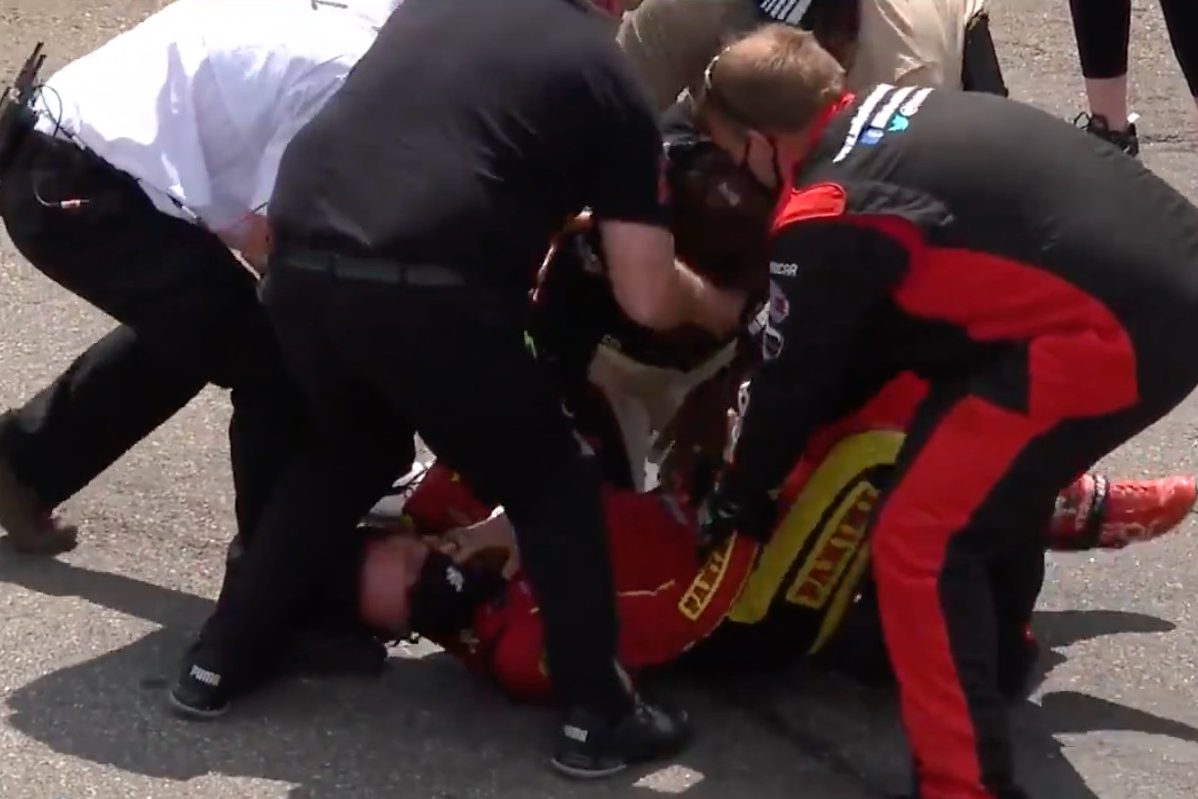 Last Sunday’s Xfinity Series race at Martinsville Speedway ended in a full-blown fight, as drivers Gray Gaulding and Joe Graf Jr. needed to be separated from each other by NASCAR officials after they started scrapping on the ground.

The drivers got all riled up following an incident on lap 176, when Gaulding, who was running behind Graf Jr., made contact with his car, sending it into the car of Blaine Perkins and causing both to crash.

Short. Track. Racing. 😡@graygaulding and @Joegrafjr had a dust-up in the garage after the conclusion of the race. pic.twitter.com/pgznqwWeZ1

During an appearance on SiriusXM NASCAR Radio, Gaulding admitted to causing the wreck and showed absolutely zero remorse for his actions.

“Oh yeah, I 100% wrecked him, and I’d do it again all over again,” Gaulding said. “I might have to do it again when we get back to Talladega. He’s just a moving chicane every week. Just like today, I’m not trying to throw any shots because talking about him is pointless because the poor kid can’t get out of his way.

“I think for me, it’s just like early in the race, we get the green. He starts behind me. We’re just trying to settle in and on a restart he absolutely bulldozes through me, puts me up three lanes and I lost like 15 spots. It’s funny how he forgets that. His memory ain’t all there, I guess.”

In his own appearance on SiriusXM NASCAR Radio, Graf added, “There with about 75 laps to go, Gray just wrecked us and (Perkins), drove us off into the corner and flat out-wrecked us, ending our day. I went to have words with him afterward and then he mouthed off to me and there were some punches thrown. I landed a couple.”

“The garage is just loaded with drivers who pretend they’re tough, but they’re going to find out how tough they are if they race me like that and then run their mouth at me. Just ask Gray how he’s doing now. I’m sure he needs some ice packs.”

As far as what actually led to the drivers fighting throwing down, Gaulding, who finished 21st, had this to say:

“I was just walking back to the hauler and (Graf) starts cussing me out,” Gaulding said. “I literally started laughing. I think that’s what made him upset. I was laughing because he’s very awkward, and I didn’t know if he was serious or not.

“When we were done talking, he started swinging. What’s kind of funny to me is like if we want to scrap and you want to fight, let’s go right now. You give me the look, we’ll go. I thought we were leaving the conversation. All of a sudden, he glazed my head, which I was not phased by that at all. So, I tackled him and we went on the ground. Obviously all the officials did their work.

“It’s really funny … I have to say to the poor kid, he’s got a lot to learn. When you drive the way he’s currently driving, he’s going to get wrecked. I’m very, very happy that I was the one to wreck him today.”