Team rips “weak” penalties, says they make a “mockery” of the sport 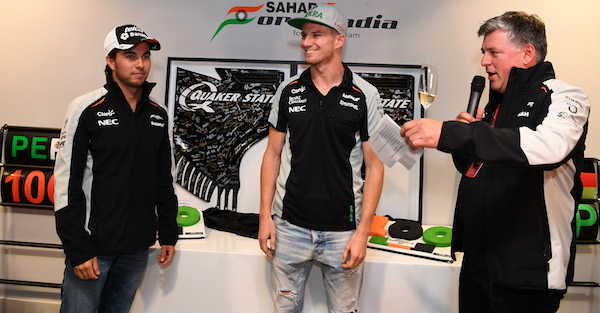 Sahara Force India driver Nico Hulkenberg received a five-second penalty during the Abu Dhabi Grand Prix, and the penalty helped lead to him finishing sixth in the season finale.

Force India Chief Operating Officer Otmar Szafnauer was clearly displeased about the penalty, and he had harsh words about penalties in general.

“It just makes a mockery of the sport to have it so inconsistent,” Szafnauer told Sky Sports.

“I think Hulkenberg should have given the place back just like when he did the same thing to Grosjean.”

Related: Race team says it will choose a driver next week ? maybe

The decision and Hulkenberg’s finish sent Renault to sixth in the Constructors’ Championship, which also led to Szafnauer being unhappy.

“It’s a track position race here, we knew they were a bit quicker than us on the ultrasoft which is why we needed to get ahead and stay ahead,” Szafnauer said.

“Then Hulkenberg cuts the corner, the FIA don’t do anything about it and, guess what, they gain a place in the Constructors’ Championship which means more money and more competitiveness next year. It’s not great.”

WATCH: Hulkenberg on that overtake on Perez that left Force India unhappy & clinching sixth in the championship for Renault #F1 #SkyF1 pic.twitter.com/yNkVm2rXat

Hulkenberg didn’t seem as upset over the result, and he actually said the five-second penalty was “fair and reasonable” under the circumstances.

It’s understandable why Szafnauer was so upset about the decision, and the penalty came at an inopportune time. But Hulkenberg seemed to agree with it, and it’s an unfortunate way to end the season.