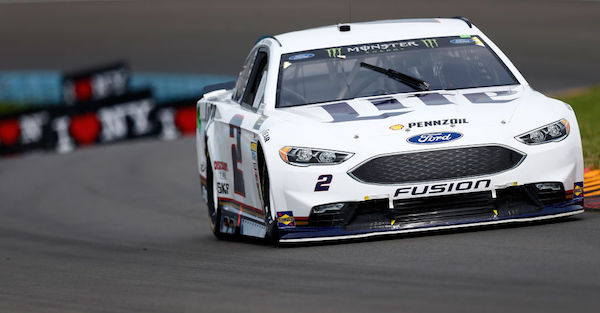 While Toyota was dominating the 2017 season in NASCAR, Chevy and Ford were left looking for answers. Chevrolet thinks it’s found the solution to the Toyota problem, and will unveil its new Camaro ZL1 next month at Daytona.

That means Ford will have the oldest model on the racetrack for the 2018 season. Ford had a competitive year a season ago as Kevin Harvick and Brad Keselowski both made the Championship 4, but let’s face it: Toyota was destined to win the title last year. The only real drama was whether it would be Martin Truex Jr. or Kyle Busch.

Chevy is expected to make a leap forward this year, and it’s unlikely Toyota takes a step backwards. Ford reportedly has plans to unveil a new Mustang for the 2019 season, but they’re already falling behind if its drivers have to wait that long.

Related: Kurt Busch hints that Ford will make a move to match Chevy and Toyota next year

Harvick said the current model of Ford was designed for an older style of racing.

“We have a car that was designed for a huge spoiler in the back and is definitely the oldest car [Fusion] on the racetrack compared to the other manufacturers,” Harvick said via ESPN’s Bob Pockrass.

Of the 16 playoff drivers in 2017, five of them drove a Ford. Only four drove Toyota, and seven drove Chevys. But it was clear the Toyota drivers had an advantage despite having the fewest number of playoff drivers.

Ford can’t afford to fall behind any further. The manufacturer hasn’t won a title since Kurt Busch in 2004, and even Dodge has won a title more recently and they’ve been out of NASCAR for several years. Keselowski won his 2012 title in a Dodge, and Harvick won his 2014 title in a Chevy.

The new Mustang will likely make a big difference, but Ford drivers have to wait another year before they can drive it. It wouldn’t be surprising if Ford missed out on the Championship 4 this season, which would put a lot of pressure on the manufacturer heading into 2019.