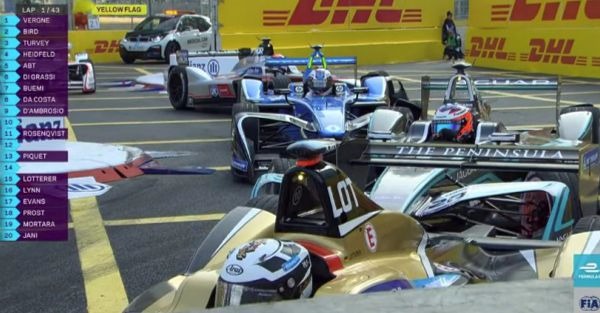 The 2017 Formula E season can only get better from this point forward.

In the all-electric race car series’ opening weekend, an embarrassing crash took place in the first event at the Hong Kong Central Harbourfront Circuit, which prompted a debate about whether designers spent enough time creating the track — at least when it came to making a coarse that’s wide enough for passing.

The incident in question occurred on the first lap of Saturday’s event when André Lotterer’s car became stuck against the wall in the chicanes. This brought out the first red flag in Formula E’s history to clean up the carnage after no other cars could get by Lotterer’s vehicle, according to Jalopnik.

Then in Race 2, Audi driver Daniel Abt thought he had won the race and even got to celebrate in victory lane, only to be stripped of his victory later on Sunday night when it was discovered the FIA security stickers on his car’s motor and invertors did not match those listed on the vehicle’s technical passport. While Abt’s Audi Formula E team initially said they would appeal this result, essentially arguing it was just an administrative error that didn’t affect the car’s performance, they eventually backed down and accepted the decision, according to Motorsport.

Needless to say, these two instances brought more negative attention to the sport than it probably would have liked.

For those fans not familiar with Formula E, this racing series got its start in 2014 with the goal of accelerating the development of all-electric car technology. During a normal race, each driver pilots two electric cars, stopping at some point to completely change vehicles. This is obviously quite different from the normal tank of gas and tire swap that’s performed in the pits of other racing competitions. Furthermore, Formula E races last approximately 45 minutes to an hour, according to METRO.

With these unique characteristics, Formula E could be an option for fans looking for a new series to watch since NASCAR and Formula 1 are done for the year.

The next Formula E race will be held in the Moroccan city of Marrakesh.

Hopefully, for the sake of the FIA, the next ePrix won’t feature the same drama that defined opening weekend.