Video: A fan gets on the track at Martinsville and and tries to go after a driver 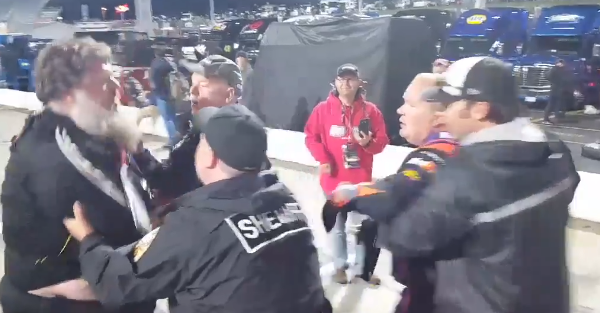 There is no excuse for this. None.

A fan got on the track and Martinsville and tried to go after Denny Hamlin. The fan was apparently upset that Hamlin and Chase Elliott wrecked during a contentious race. You can see a man wearing a jacket that says “Sheriff,” and others, pushing the fan away.

As you can see, the fan got close.

NASCAR prides itself in the fan experience, but is one instance in which the fan was way out of bounds.

He was apparently upset because Elliott got taken out by Hamlin as both were trying to punch a ticket to the championship race. After a heated exchange with each other on the track, the two drivers were interviewed:

"This is a ticket to Homestead." – @dennyhamlin to @chaseelliott #NASCARPlayoffs pic.twitter.com/CRArQq9mxP

Hamlin admitted he took Elliott out and said he felt bad for the team, but he also believed he was justified in trying to clinch a spot at Homestead. He also claimed he was being pushed when the wreck happened, but Elliott disagreed.

“I can’t control his decisions and whatever the hell that was.” Chase Elliott said.

Another interesting point was just how strongly the crowd was behind the 21 year old driver. Booing Hamlin and cheering loudly for Elliott during their respective interviews.