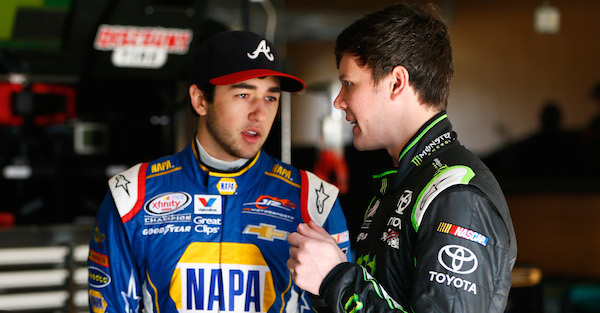 NASCAR will be relying on several young drivers to up their game next year, and drivers such as Chase Elliott, Kyle Larson and Ryan Blaney will be expected to contend for the title.

But there’s another young up-and-coming driver who could make the biggest leap of any driver in 2018.

Erik Jones capped off his first season as the 2017 Rookie of the Year, and he has the skill and team to compete as a top-10 driver next season.

Jones had an excellent rookie season, and he had five top-5s and 14 top-10s in 2017. At one point, he had a stretch of three top-5 finishes in a row in the No. 77 Toyota for Furniture Row Racing.

In 2018, Jones is moving over to Joe Gibbs Racing, and he’s replacing Matt Kenseth in the No. 20 car. Changing teams to a more well-financed team at JGR should help Jones improve even further, and he’ll also have the benefit of having a champion as a teammate in Kyle Busch.

Related: With his Rookie of the Year win, Erik Jones makes history

Jones narrowly missed out on the playoffs as a rookie, but he should be a playoff driver next season. Elliott, Larson and Blaney all made tremendous strides last year, and Jones could be next in line to make a similar leap next year.

Jones will have plenty of competition to make the playoffs, and it will be important for him to start off the season on a positive note.

Jones is still looking for his first career win, but he doesn’t necessarily have to have a win to make the playoffs. Chase Elliott still doesn’t have a Cup Series win, and he finished fifth in 2017.

After finishing 19th last year, Jones only has to improve a few spots to make the postseason. But given what he proved as a rookie, NASCAR fans should expect much more than just a playoff berth from Jones next year.