Disciplinary actions for Kyle Busch’s crew chief are under review 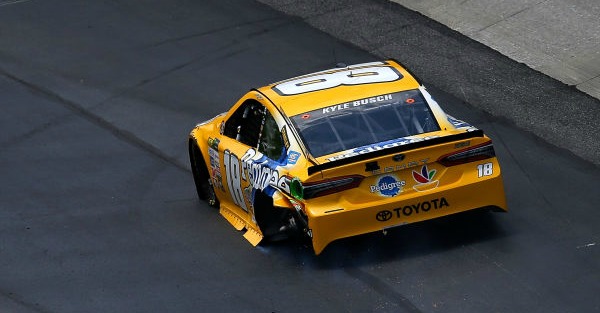 Kyle Busch started on the pole Sunday at the AAA 400 Drive for Autism Monster Energy NASCAR Cup Series race, but a costly pit crew mistake put him far behind.

Busch, in the race at the Dover International Speedway, went into the pit following a caution flag on Lap  18. But, the pit crew didn?t get the left-rear tire installed on his No. 18 Joe Gibbs Racing Toyota. When Busch took off, the tire came flying off, and you could see sparks flying from underneath the car.

Busch had to come back in for another pit stop, and he rejoined the race at the back of the back. As costly as the mistake was for Busch, it could be even more costly for his team, which could face a suspension under NASCAR rules.

?From what we?ve seen so far, it wasn?t trying to go back on the racetrack with two lug nuts. It was obviously human error in both cases. But, like I said, there?s a lot of discussions internally that have to happen on how we?re going to rule on that.?

Basically, the automatic four race suspension for the tire carrier, the tire changer, and the crew chief was designed to stop teams from running with fewer lug nuts to save on weight. Since these incidents (The other loose tire occurred in Friday?s Camping World Truck Series race) happened without intent, the suspensions are less automatic than previously thought.

The final decisions are expected to be made by Wednesday.