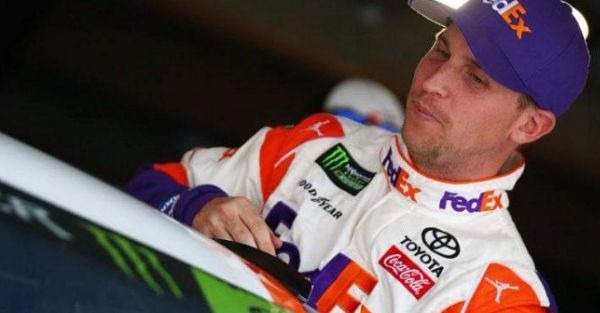 They say the truth will set you free, but Denny Hamlin has absolutely no intention of admitting he wrecked Chase Elliott on purpose in last weekend’s event at Martinsville.

No way, no how, it’s not going to happen.

?Wrecks happen in racing,? Hamlin said on SiriusXM NASCAR Radio’s “Tradin’ Paint.” ?It has for a billion years. It?s not the first, and it won?t be the last. I can guarantee that.?

To provide more context, Chase Elliott was leading the First Data 500 with three laps to go when Hamlin’s car made contact with the rear bumper of Elliott’s No. 24 Chevy in turn 3, causing Elliott’s car to spin out.

After the race, Hamlin said, “I’m not trying to say I wrecked him on purpose. I tried to move him out of the way and (Elliott) spun out.”

Following that statement, the fans at Martinsville vehemently booed Hamlin and criticism only grew worse on social media, where many NASCAR fans shared their disapproval of Hamlin’s driving style.

Hamlin even shared a message earlier this week on Twitter apologizing to Chase Elliott, but still maintained that he didn’t crash him on purpose. Unfortunately though, for Hamlin, that Tweet earned more attention for a math error rather than its intended purpose.

Denny is my hero. This man out here averaging 300+ races a year for the past 29 years https://t.co/DKq3WpDA2l

Still though, four days after the wreck, Hamlin is sticking to his original story.

?I know in my head there was absolutely no intent,? Hamlin said, according to NBC Sports.

?I was on my way home, just thinking about things. Obviously, what I was being regretful for was being too aggressive at that time. I know in my head there was absolutely no intent. I pretty much laid it all out there. It?s the first time I?ve been ever in a situation like that before.

?I haven?t seen any tapes coming up of me saying (or) showing that ain?t true. I think my reputation on the race track and the way I drive speak for itself.?