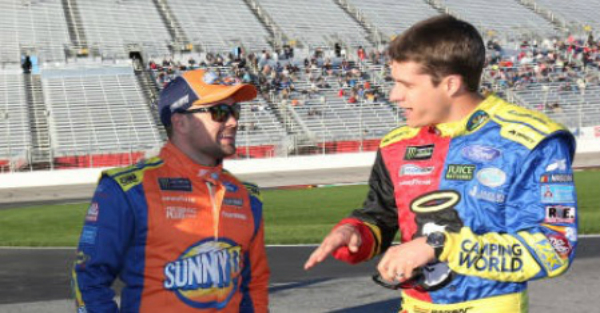 Front Row Motorsports has been running races in the NASCAR Monster Energy Cup Series since 2005, but one of its drivers feels they’ll now be able to consistently run at the top.

Former Rookie of the Year David Ragan is on his second stint with the team and has run four full-time seasons with FRM (three seasons from 2012-14 and last year 2017). In his 144 Cup Series races with the team,  he’s managed to win one race with eight top-10 finishes. Ragan believes that will change soon, according to motorsport.com.

RELATED: Front Row Motorsports locks up a sponsor that brought them good luck

“It is a long hard process to turn from a startup team into a race winning team, which Front Row has won a couple races, to be a consistent contender for top-10 and top-15?s,” Ragan said. “That is our next goal.”

“We are up against Penske and Hendrick and Richard Childress Racing and Roush Fenway that have been around the sport for 25, 30, 35 years,” Ragan added. “Front Row has only been a full-time team for nine seasons and I am embracing working with Bob Jenkins and our group to try to get better.”

In addition to Ragan’s win in 2013, Chris Buescher won at Pocono for FRM in 2016 and managed to finish with six top-10’s in his two years with the team. Ragan sees the recent success of Martin Truex Jr. and Furniture Row Racing as a blueprint to succeed in the Cup Series against the historic top-tier teams.

“I think what Furniture Row Motorsports did last year is kind of a shot in the arm to some of these smaller, newer teams in the last 10 years,” Ragan said.

Truex has been driving for FRR since 2014, but over the past two seasons has seen a tremendous amount of success. With four wins and 16 top-10 finishes in 2016 and eight wins, 26 top-10 finishes, and a Cup Series championship, Truex has dominated the sport of the past two years. With the success of FRR small teams know it can be done, it’s just a matter of when will others emerge to the front.

“I don?t know how or when that is going to happen but our sport has always had that turnover every 20-25 years and I think in the next 10 years you are going to have some more turnover,” Ragan said.

FRM will be a two-car team this season with Ragan in the No. 38 and Michael McDowell in the No. 34, so it will be interesting to see what they’ll be able to pull off.

“It?s been awhile since I?ve had a teammate, so I?m really looking forward to working with David, whom I?ve become pretty good friends with over the years,” McDowell said. “As a team now, we go into the season knowing we have five or six races that put us in position to get a win and earn a spot in the playoffs.”